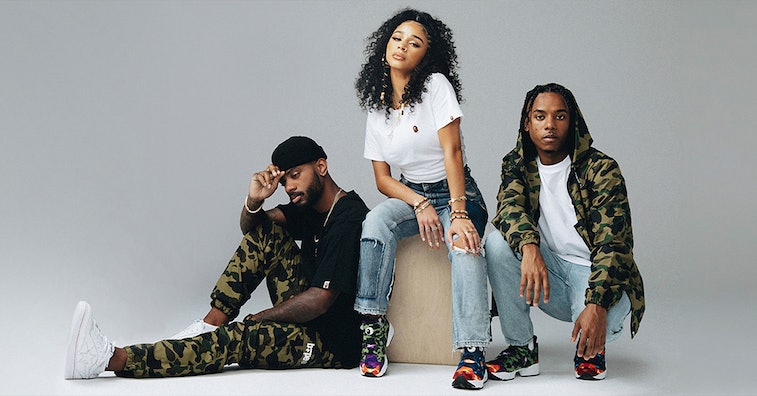 BAPE and Reebok have reunited to launch the latter’s Club C and Instapump Fury for the third time, offering no apparent change from their last drop. Their most recent iteration of the Club C maintains its white upper with blue and red top-stitching, while their Instapump Fury seems to retain the exact design it bore during its previous release.

Ever since the initial 2020 release of the two brands’ sneakers, it’s become evident that their collaboration revolves around profit, with little meaning otherwise. Reebok and BAPE each have their own legacies, although both are straining to maintain them: In the process of being sold by Adidas, Reebok has questionably partnered with Jurassic Park, Power Rangers, and even NERF, while BAPE’s similar string of nonsensical collaborations has cost the brand its streetwear credibility. Still, the duo’s sneakers must be profitable to some extent, otherwise their partnership would’ve ended sooner.

Déjà vu — Like — or rather, exactly like — the previous Club C, BAPE and Reebok’s latest low-top sneaker sports the former’s BAPESTA star logo on its medial side, with “BAPESTA” written on the heel. Rivaling the Air Force 1, which the BAPESTA sneaker is famously inspired by, the all-white Club C accents its upper with red and blue contrast stitching.

A second chance — Although the pair of sneakers already released last August, Reebok and BAPE sought out a different change of models, recruiting Bryson Tiller, Ryan Trey, and Nia Sultana to star in their campaign. The marketing strategy didn’t seem to make the shoes more appealing, however, and plenty were quick to point out the footwear’s familiar designs. “These literally released a few months ago,” wrote a commenter on BAPE's Instagram. “Really? Again??” another added, throwing in a crying emoji for good measure.

While it’s hard to imagine, demand for the first drop of the co-branded Club C and Instapump Fury could’ve overwhelmed the amount of stock available, meaning the upcoming release will serve as a second chance for people to get their hands on the sneakers. It’s worth noting that the initial release was mostly limited to European retailers, too.

According to the Reebok and BAPE, the Club C and Instapump Fury will be available globally at BAPE retail locations and at the streetwear brand’s website starting January 15. A follow-up release will take place on Reebok’s website on January 21, giving fans of the collaboration plenty of opportunities to score their desired sneaker. Opt for the clean Club C, or go all out with the camouflage Instapump Fury, which ironically stands out more than it blends in.