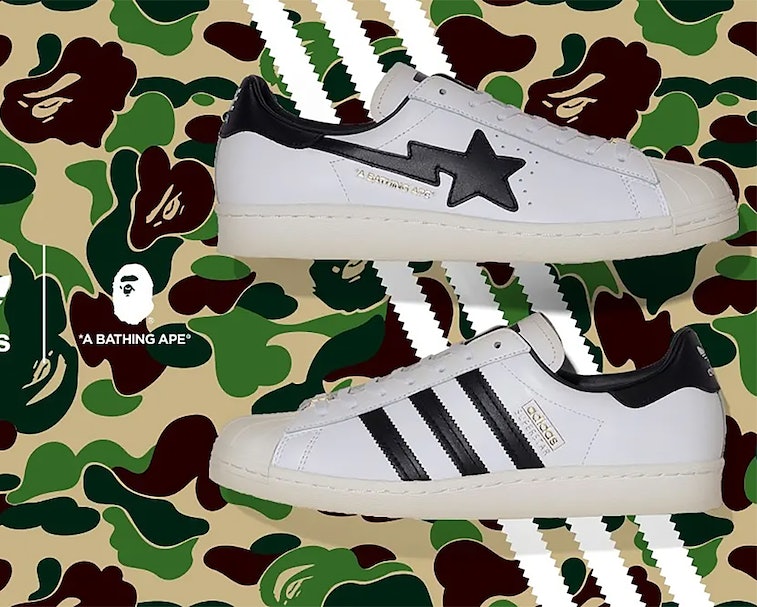 BAPE and Adidas have been collaborating on the Superstar since 2011, and the best one yet may yet be in store. BAPE's "Sta" logo will appear on the silhouette for the very first time, but that doesn't mean the Three Stripes are completely gone.

Each shoe features both BAPE's insignia and the iconic stripes, but the placement is reversed for each sneaker. The "Sta" appears prominently on the right shoe's lateral side, while it'd tucked into medial on the left. This rare deviation from Adidas' script is the primary focus for the gold, black, white, and gold pair — but those looking for something crazier will have their eyes on the patchwork Cloud Camo version.

Black, blue, red, and purple camouflage all appear on the much louder Superstar, including on the right shoe's medial stripes. Not one panel on one shoe matches the other, which should make it a true oddball in your collection.

A lot more logo play — Further logo placements help the left and right shoes stand apart from each other more, including gold foil embossing on both shoe's lateral sides. Because the "Sta" logo gets prime placement on the right shoe, BAPE's logos appeal on its heel, tongue, and insole. Adidas is then given the same spots on the left shoe — but a gold block BAPE lace dubrae appears on both kicks.

Seeing the "Sta" logo on anything but the BAPE Sta is still a strange sight, but it's especially unexpected of the Superstar of all shoes. The 50-year-old silhouette is to Adidas what the Air Force 1 is to Nike — but the BAPE Sta is a well-known and obvious bootleg of the AF1. We're not complaining tho, because what BAPE is calling the "Skull Sta" is a hot spin on the shoe Adidas has been pushing hard over the past year.

BAPE's leading the release — Both versions of the Skull Sta are scheduled to release this Saturday, February 27, through BAPE's website and physical locations. Pricing has only been announced in Yen (~$171) so it's unclear if the drop will include the U.S. webstore and locations. It's also possible Adidas will eventually release it through its own channels, so we'll just have to wait and see.

If you want to take matters into your own hands, though, you can enlist a proxy service to get a pair headed your way from Japan. We wouldn't blame you either — this is one of the few BAPE releases we've been properly excited about in a minute.