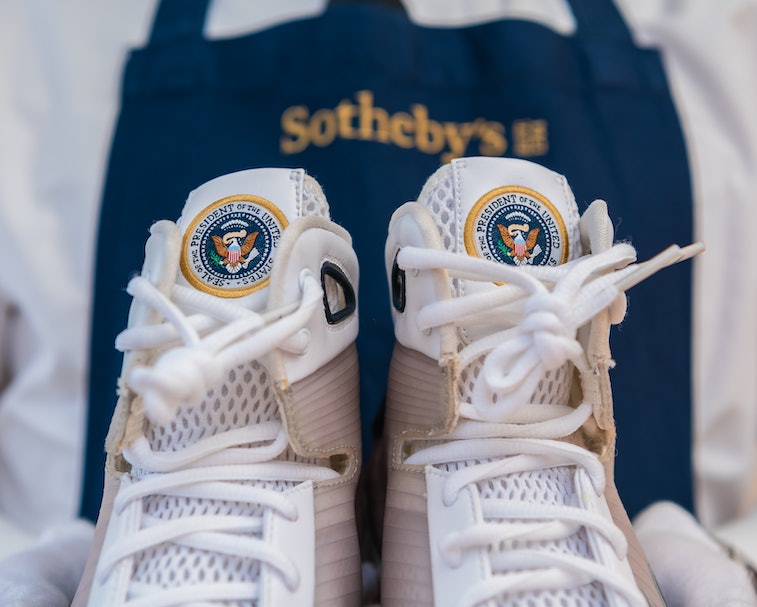 In 2009, Nike gave a special pair of Hyperdunks to U.S. President and subscriber to the notion that "ball is life," Barack Obama. The bespoke sneakers feature the Presidential seal on the tongue, "44" embroidery on the toe to commemorate the 44th president, and patriotic insoles with graphics including bald eagles and the year "1776."

The sneakers were made exclusively for President Obama, but the only sample known to exist is going up for sale via Sotheby's for $25,000. Sotheby's has dipped into sneaker auctions in recent years, but it's now offering shoes for a fixed price through its new "Buy Now" platform.

While the Obama Hyperdunks are the flagship drop, Sotheby's is also selling rare sneakers starting at $500 and topping out at $150,000 for an original pair of Nike Moon shoes, the first to feature a "waffle" outsole. Other high-profile listings include game-worn and autographed sneakers from Kareem Abdul-Jabbar and Steph Curry, both with a price of $25,000.

More on the Obama 1s — Nike's Hyperdunk was created specifically to be worn by basketball players at the 2008 Summer Olympics, and a year later President Obama was given a custom pair of the then-cutting-edge sneaker.

Obama's Hyperdunk is similar to the "United We Rise" variant, with a white leather upper, blue Swoosh, and visible Flywire tech. The size 12.5 sample, just a half-size bigger than Obama's size 12, will become available to purchase this Friday, February 12, to coincide with President's Day Weekend. It's also available for public viewing, beginning today, at Sotheby's New York City gallery.

These aren't Barack's only custom kicks — The 44th president was given another rare pair of sneakers on the way out of office. When the Chicago Cubs visited in January 2017 to celebrate their World Series victory, outfielder Dexter Fowler gifted Obama a pair of custom, patent-leather Air Jordan 4s.

Coming in a special box, the black AJ4's featured the Presidential Seal on the tongue and an Obama "O" logo as the lace dubrae. His signature was also lasered into the sneaker's heel — and unless there's a sample for these, too, the Obama Jordans would be among the rarest sneakers ever made.