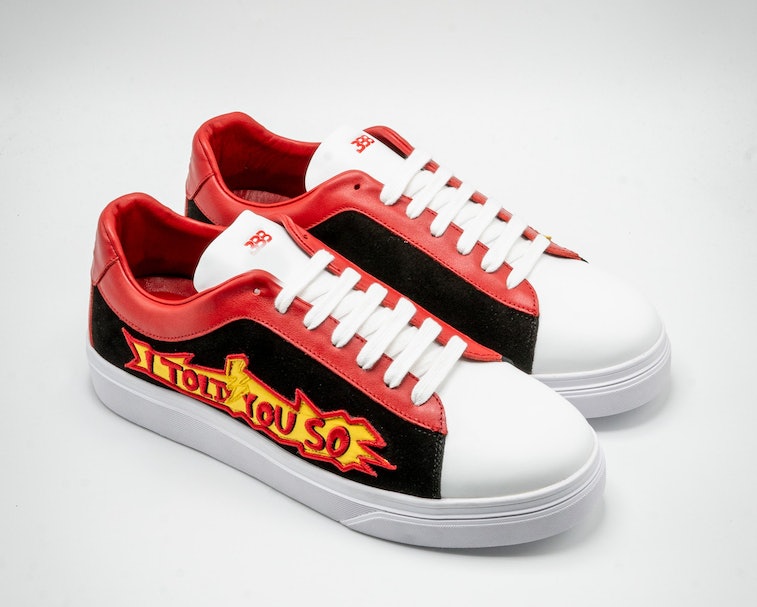 The loss of Lonzo and LaMelo Ball should have been the death knell for Big Baller Brand, but their father LaVar is bringing it back with a $900 sneaker nobody asked for.

On the same day Lonzo —the NBA’s reigning Rookie of the Year and most likely to become a superstar out of the Ball brothers — was given his first signature sneaker by Puma, Big Baller Brand has announced its return with a clear and obvious ripoff of the Adidas Superstar. Behind the design is LiAngelo Ball, the true middle child of the family and the only brother yet to play a single game in the NBA.

Known only as the BBB, the lowtop lifestyle sneaker features a shape recognizable from the Superstar, only without three stripes or the signature shell toe. It’s debut comes in four color schemes, each with different logo arrangements, including an $895 version with massive “I Told You So” embroidery.

Are LaVar and LiAngelo trying to overshadow LaMelo — Perhaps even more shocking than Big Baller Brand seeking a comeback is the timing for its new sneaker. While the family ties have been loosened the brand, it still reads as scummy not to let the youngest Ball brother enjoy the momentous occasion of his first signature shoe without his father and brother vying for attention.

Big Baller Brand first launched in 2016 as the trio of talented prospects and their loud-mouthed father first grabbed the spotlight. LaVar sought out to create an unlikely competitor to Nike and Adidas in the basketball space, with all three of his sons getting their own signature sneakers. Lonzo, the eldest ball and first to make it pro, began his career wearing Big Baller Brand sneakers but eventually switched over to the Kobe line from Nike. LaMelo Ball then signed to Puma prior to being drafted no. 2 in the NBA Draft, thus leaving Big Baller Brand without a single star.

To make matters worse, Big Baller Brand co-founder Alan Foster was discovered in 2019 to have misused $1.5 million from both the personal and business accounts of LaVar. The brand’s website was shut down in April 2019 before going live again in December 2020, and in the period in between it was never clear what would ultimately happen to Big Baller Brand.

All four variants of Big Baller Brand’s BBB sneaker are available now through its website, with prices starting at $695. According to the product description, the kicks are hand-crafted out of “premium” Italian leather — but we can’t in good conscience tell you it’s a luxury worth splurging for. If you really want a status symbol Superstar, just go for the official Prada x Adidas collaboration.