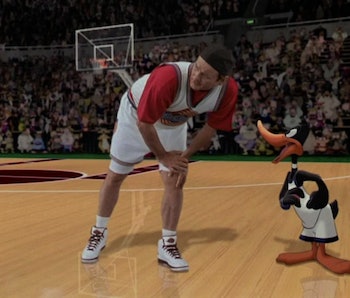 Auction houses have gone ham on sneakers over the last few years as they seek to capitalize on the fervor that’s created a $6 billion global resale market. As a result, some legitimate gems have gone up for sale, including the first Nike “Air Yeezy” ever shown to the world and a pair Air Jordan 1s worn and signed by Michael himself.

A gold rush can also lead to some more curious decisions, and we can’t help but scratch our head at the latest auction that’s come to our attention. The Air Jordan 2 Retros Bill Murray wore during the game scenes in Space Jam has opened up to bidding through an auction house that specializes in Hollywood memorabilia.

Unless you’re especially drawn to looking at what’s on people’s feet, you may not have ever realized Murray even wore Jordans in the movie. The Air Jordan 2s at hand are less something people have lusted over previously and more like something that suddenly (and temporarily) grabs the attention of a dog sticking its head out the window. And someone liable to indulge in such a spontaneous whim will indeed fork out a non-trivial amount of money for the kicks, as the highest bid is already at $15,000.

Let’s put that figure in perspective — If you’re a sneakerhead, the first thing that comes to mind when you hear “Space Jam” is the Air Jordan 11 Michael wore for the film. Nike didn’t release the sneaker to the public until 2001, and it took another nine long years for it to be reissued. That second gap made the Space Jam Jordans one of the most highly anticipated sneakers for nearly a decade, but neither were exactly the real thing.

Five pairs of the Air Jordan 11 were made for the film, and they featured Concord Purple accents instead of the Varsity Royal that was released to the general public. A deadstock, or unworn, pair sold for just $11,100 on eBay in 2004. Another pair worn by Jordan while filming also went on eBay around the same time, and its backstory is a part of sneaker lore. As the story goes, Jordan’s stylist for the movie kept the pair and traded it with the eventual seller for a Honda Civic.

Obviously, the sneaker landscape has changed significantly over the past two decades. Not one person would think Bill Murray’s Air Jordan 2s are more valuable than the original Space Jam Jordan 11s, and in hindsight, the asking prices for the latter were a comparative steal.

More on Murray’s Js — The “scene-worn” Air Jordan 2s are a size 11 and come with the original box. Also included in the sale is a pair of white socks and a red Acme Clothing T-shirt with Bugs Bunny and the Tasmanian Devil that Murray wore underneath his Toon Squad jersey.

No end date is listed for the auction, which you can find right here, and it’ll be interesting to see what the final sale price ends up being. And for the few people who own the OG Space Jam Jordans, now might be the time to flip them for what should be a tidy profit.