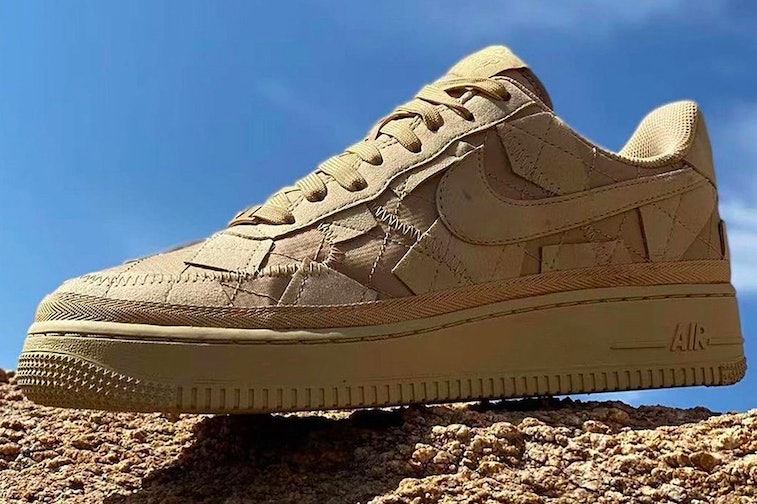 In the sneaker game, there are highs and there are lows. Billie Eilish, hot on the heels of her super strappy Nike Air Force 1 High sneaker, is now partaking in the latter with a fresh Air Force 1 Low.

Bossa nova — Thanks to a preview by @solebyjc, the low-top sneaker appears similar to its predecessor, at least in color. It sports a “Mushroom” palette on the upper and rubber sole, which is also a nod to the vegan and recycled materials used to make the shoe. (Billie is a vegan herself.) Her previous AF1 High was made using 80 percent recycled materials, marking it as her first collab with a focus on sustainability.

The singer isn’t one to downplay her creative freedom, despite her monochromatic color palettes, so the sneaker features a messy, deconstructed upper. Almost creating a warped plaid pattern, overlapping quilted patches are stitched to the base using an exaggerated zig-zag and lattice method. Eilish’s signature Blohsh character sits at the dubrae as it does on all her sneaker collabs, and more co-branding appears on the cork insole.

All the good girls go to Nike — Eilish is tapping into one of the most popular Nike silhouettes, but that hasn’t always been the case. She’s lent a hand on a bright green Air Jordan 1 KO and another beige Air Jordan 15, two of the brand’s more underrated models. Her Air Force 1 High also got some puzzled reactions because of the five Velcro straps that ranged from toe to collar, though it ultimately gained favor from Eilish enthusiasts and sneakerheads alike.

Nike, having just turned 50, seems to be calling on plenty of old and new friends to celebrate. It hasn’t even been a month since Eilish’s last AF1 High was released, and the brand already has four Travis Scott kicks in the pipeline for the next few weeks.

There’s no word yet on when the Billie Eilish x Nike Air Force 1 Low will officially drop — and for how much — but a summer release seems more than likely. It’s also too early to tell if Eilish’s AF1 Low will be accompanied by any apparel or accessories like her previous sneaker release, but the patchwork kicks are certainly cool enough to stand on their own.