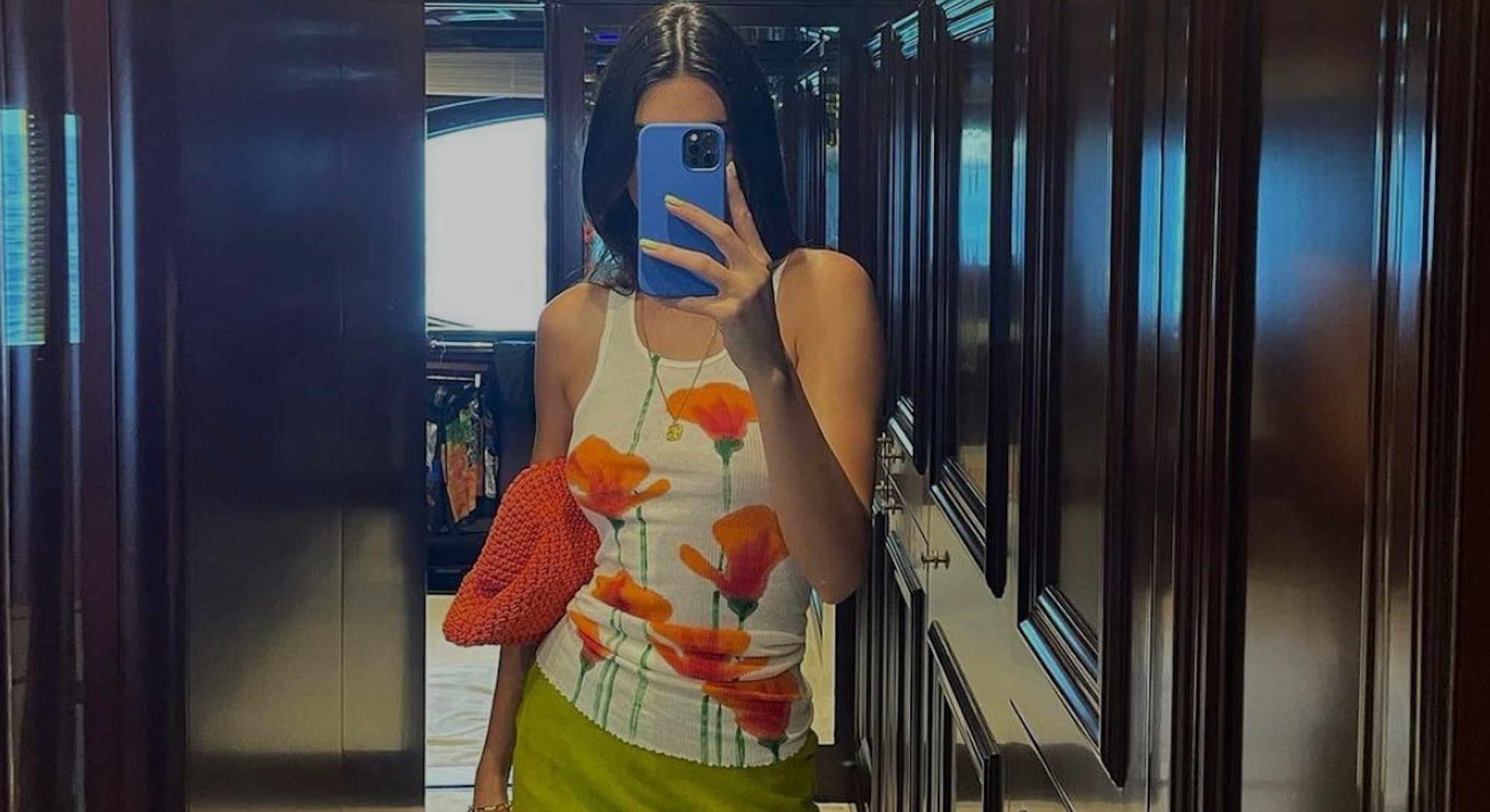 Birthdays are supposed to be a day of celebration. But sometimes, as the numbers on the cake get higher, they become a rather unpleasant realization that you’re only growing older.

At least in my experience, later birthdays never compare to those of your youth — and high expectations become disappointing realities. There’s often no themed party, childhood friends, or parents hovering over a cake commemorating your existence. It’s more like drinks, dancing, and other “adult” festivities, which are fun but not the same kind of fun you’re nostalgic for.

“Birthdays are kind of an intense day,” Murphy told Input in an interview. “I’m big on my birthday; I love to wear a social outfit and be celebrated all day.” But for her, the day is sentimental — it represents the day you were born, a day belonging “to you and your parents,” she says. Having lost her mother while in college, Murphy describes her birthday as bittersweet.

Birthday Girl Shop is equally sentimental as its creator, although it celebrates the idea of older age: Murphy pulls inspiration for her prints from vintage patterns, she says, and finds herself scouring eBay for retro fabrics. “[Birthday Girl] is very playful,” she adds. And like vintage pieces — and people’s own birthdays — Murphy wants the brand to be “one-of-a-kind.”

There’s a saying Murphy references, and relates to, that goes a bit like: “I quit my 9 to 5 to work 24/7.” An average day running Birthday Girl, she says, includes painting or sewing its products, brainstorming new designs, ordering vintage pieces online, managing the brand’s social media, shipping out orders, and styling and shooting products. Still, Murphy doesn’t face the same “constraints” as her previous job, and she says she’s “incredibly grateful” she can pay her rent doing something she loves.

Running Birthday Girl Shop full-time was something Murphy never could have imagined when she began creating her designs (to sell) in 2020. She had “messed around” with similar styles while in college, she says, and samples from 2015 look “fairly similar” to what she produces today. But having worked as a stylist between 2015 to 2020, Murphy was focused on other designer’s creations, not her own.

“After working in all these different jobs [in fashion], I finally felt prepared on how to [launch Birthday Girl],” she says. “Right before the pandemic, I was trying to figure out how to go freelance with my job so I could focus on [Birthday Girl], and then I got laid off due to the pandemic, which was kind of serendipitous.” From there, Murphy took the summer of 2020 to experiment with her brand until its launch later that fall, playing around with prints and vintage fabrics.

The process of building Birthday Girl Shop was difficult, she recalls, not just in building a website and finalizing designs but in support. “I felt like I couldn’t do it because I didn’t have [my mom] with me,” Murphy says. “But it’s what she would have wanted me to do.” Of course, her mother would have critiqued the way she sewed, she laughs, even after teaching Murphy herself. “I still use her sewing machine,” she adds.

During the pandemic, just before the launch of Birthday Girl, Murphy says she “really protected herself.” That year had been hard enough already, and on her birthday — an emotional day for Murphy, she says — she wanted to celebrate herself: “My mom would make dresses for me for special occasions; she made my prom dress,” Murphy says. “So I made myself a dress — something I wanted to wear that I thought would be really fun — and a cake to celebrate myself [on my birthday]. It’s definitely hard [to do so], the older you get.”

But what Birthday Girl Shop represents is the “fun” Murphy describes. With its floral painted tank tops and vintage sheet skirts, the brand offers something fun to wear, making everyday feel special — like a birthday.

Much like the themed party wares often decorating children’s birthday events, Birthday Girl works around a “strong kind of color theory,” Murphy says. Using her styling experience, she says she sources her blanks — white tank tops, sweats, and button-ups which serve as the brand’s canvases — and vintage fabrics by fitting them into her “parameter of color and then matching them together.”

Murphy has a history of “visual curation,” she says, not just in her past career but in her social media endeavors. “I used to run this page called ‘Amazon Fashion Secrets,’” she says, explaining that she would find unique apparel and accessories for fans of accessible fashion. A similar type of curation goes into Birthday Girl, she notes, as she pieces together what patterns and prints she wants to create. “It’s like a fun puzzle.”

The skirts offered by Birthday Girl Shop are some of the most curated pieces offered by the brand, as they often mix plaid fabrics with thematic sheets bearing Nascar or 101 Dalmatian prints. Murphy says the retro patterns play into Birthday Girl’s nostalgic theme: “I get a lot of messages like, ‘Oh my brother had those baseball sheets,’ or ‘My friend used to have these,’ therefore they ‘have to get the skirt’ [bearing the same print].”

Birthday Girl is meant to be as versatile as its offerings. Its primary color palette can be mixed and matched with additional Birthday Girl apparel or basic closet staples, Murphy says, and many of its pieces are also workwear-based, offering sizing and styling options that shoppers have already become familiar with. No matter what style or print people prefer — Birthday Girl offers a range of florals and fun graphic pieces alongside its one-off skirts — there’s something for everyone.

“And then there’s also men, who wear the button downs and the tank tops.”

“I see tweens wearing the tank tops that feel like an adventurous type of print for them, and [the style] also appeals to that kind of fashion girl that clashes their patterns in a successful way,” Murphy says. “Older women love to wear the button downs, ‘cause there’s kind of like an art teacher look to it. And then there’s also men, who wear the button downs and the tank tops.”

Early in 2021 — around April, Murphy recalls — one of Birthday Girl’s tank tops was seen on influencer Emma Chamberlain. Ian Charms creator Lisa Sahakian, a friend of Murphy’s from college, had sent some of her necklaces to Chamberlain and allowed Murphy to include some Birthday Girl Shop pieces as well. “I actually have a little community of female-owned businesses from my time at college,” Murphy says, saying she reaches out to individuals to ask for advice. “We all usually work alone, so it’s nice to have someone to check in with.”

“It was this little shirt I had painted in my living room. And Kendall Jenner was wearing it on a yacht.”

That same community is there to celebrate each other’s wins, too. In August, Kendall Jenner was photographed by paparazzi in Italy wearing a poppy tank from Birthday Girl Shop — it was like a “badge of honor,” Murphy says. She actually has a T-shirt printed with the photo of Jenner wearing the top, which she says her friends got for her. “It was this little shirt I had painted in my living room,” she laughs. “And Kendall Jenner was wearing it on a yacht.”

Joe Jonas wore the same Birthday Girl design just a few days later, wearing the top during one of his concerts. “Seeing it in concert, and on a guy, was cool,” Murphy says. “It was on the jumbotron and everything.” Literally, Birthday Girl Shop had made it big — and accordingly, the floral tank seen on Jonas and Jenner soon became one of the brand’s best-selling items.

Birthday Girl Shop pieces are meant to be worn anywhere, anytime, by anyone, Murphy reiterates. But keeping with her goal of versatility, she “doesn’t want to get caught up producing something that sells out quickly,” nor does she want to only have one hot product. “The success of the tanks is amazing,” she adds, addressing their popularity and low price point. Yet Birthday Girl Shop is more than trends, it’s an extension of Murphy herself. “I think people really react to brands like, ‘This person is just doing their thing, and I want to be a part of that.’”

The success of Birthday Girl’s tanks allows Murphy to explore what’s next for the brand — right now, she’s experimenting with using vintage blanks and toying with the idea of offering homeware like napkins, bedding, and curtains. “When you produce so much of one thing, it gets a little tiring,” she says. “I also want to move forward in a way that is sustainable.”

“I’m never sitting on inventory,” Murphy says. “If something’s not moving, I can always paint it with another print or do a one-of-one.” But having worked retail and online retail, where there’s so much waste, she wants to move away from her largely-produced blank pieces and focus on organic or vintage versions. “I’m not at a scale where everything is completely perfect,” says Murphy, but she tries her best by ordering her blanks in small batches to avoid waste, while also producing timeless designs. ”I try not to do releases based on holidays or times of year,” she adds.

Murphy paints and sews all of the pieces for Birthday Girl Shop, often watching dramas and reality television as she works. She cites RuPaul’s Drag Race as a favorite, adding that she just finished The O.C. “I started [the show] right when orders for the poppy tank came in, and I got to the finale right as I was packing up the last ones.”

Breaks are needed to bolster her creativity though, especially as Birthday Girl Shop plans to expand in the coming months. “I try to take the weekends off and go on vacation,” Murphy says — fun is needed in order to create fun for Birthday Girl. “I gotta live.”