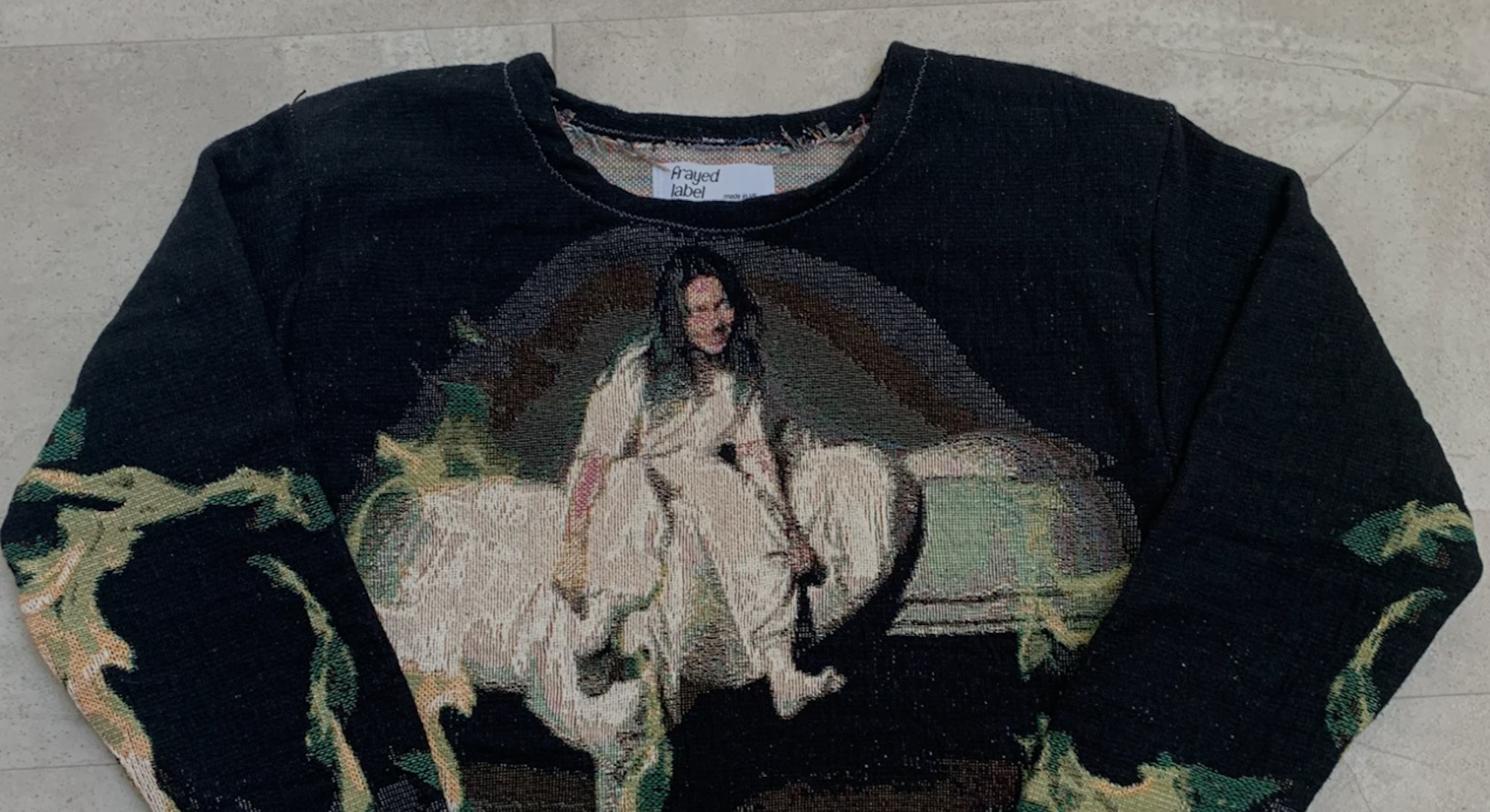 When the pandemic pushed us into our homes last year, we didn’t think we would come out of it wearing bedding.

Still, the move makes sense, considering quarantine forced people to spend more time at home and reevaluate their entire interiors. Everyday spaces took on new meanings, with bedrooms becoming boardrooms and co-workers clocking in from their couches. But now, decor is leaving the house.

Furniture has always been a part of the fashion world. Although no one is pining after Bella Hadid’s couch (yet), Fendi, Chanel, and other top name brands have long been in the home-goods game. Balenciaga dropped a silver brass sculpture of its Track.2 sneaker last year, and collab king Travis Scott even released a candle with Swedish fragrance brand Byredo. It’s literally lit. And now that Scott has given home-goods his stamp of approval, young entrepreneurs are seeing opportunity in the market. Rather than candle-making, however, they’re turning decor into something we could see the rapper wearing himself.

We’ve hit the stage in the pandemic where blankets are now fashion, and no, I’m not referencing your trusted Comfy. Instead, imagine its more mature and refined cousin, produced in prints from The Last Supper to SZA. Complete with handmade details like frayed edges and raw hems, sweaters crafted from blankets are taking Instagram by storm. Made in the era of hype, the coveted pieces follow guidelines set up by exclusive brands before them: limited product, one-of-a-kind designs, and a hefty price tag. And despite being stocked by multiple accounts, the blanket sweaters keep selling out, leaving a growing demand for more.

Fiending after cozy sweaters in the winter isn’t a new phenomenon, but since the pandemic began, the preferred environment for socializing has become "anywhere outside." Whether you’re eating outdoors at a restaurant or taking a quarantine walk, you’ll want something that mimics the warmth of your plush duvet. Luckily, a fashionable option is available in practically any design, for around $200.

Javontae Johnson was always the nicely dressed guy, even winning "Best Dressed" in high school. In his own words, he "knows what looks good." Therefore, it made sense to start his own clothing company, Worship, based in Chicago.

In an interview with Input, Johnson said he felt inspired to create his own designs after seeing wall tapestries, often hung in Mexican households. Their unique texture and story was something he hadn't previously seen in the fashion world. When Johnson found a similar fabric in a thrift store blanket, he experimented with a sewing machine, and created his first, admittedly rough, sweater. That was two years and twelve thousand followers ago.

“There’s a quote that goes, ‘worship me while I’m here,’ which is what my brand is based around.”

Now 27, Johnson carefully curates his designs, selling a variety of blanket-wear on Instagram and his brand website. Most of his work features religious connotations. While he cites his grandparents for introducing him to religion, Johnson claims his brand only uses certain elements of the church.

"There’s pillars we worship as a society," he said. "That could be religion, or culture — it could be anything." Johnson referenced one of his designs featuring Lil Wayne, noting the artist as a big influence to him and his neighborhood growing up. Wayne carried so much impact, it even inspired Johnson’s brand. "There’s a quote that goes, ‘worship me while I’m here,’ which is what my brand is based around," he said. "It’s basically just appreciating certain people like [Wayne] who inspire you."

Since he started Worship, Johnson has branched out from his original sweater design, releasing shorts, hoodies, and even hats. Most of his tapestry designs, he said, are hand-sewn, and take around two days to create. While there are now a handful of similar styles lurking around on Instagram, Johnson says it was originally him and three other people who started the "tapestry sweater" hype, which is getting more attention everyday.

Unlike Johnson, Sean Childers is new to the blanket sweater phenomenon. Around April 2020, in the beginning of quarantine, the 19-year-old saw the sweater designs on Instagram and wanted to replicate them. But it wasn’t until the fall, when he returned to college, that Childers started his brand Frayed Label.

"I went out, bought a sewing machine, and just pushed myself to start it," Childers said in an interview with Input. His label started out as a hobby, since the idea was “pretty stolen,” he admitted. Childers credits the Instagram account @4x1111 as the pioneer of the blanket sweater, though he said he sees different accounts popping up nearly every day as others try to cash in on the trend. (4x1111 was unresponsive to multiple interview requests.)

At first, Frayed Label was meant for friends, with Childers making designs at the request of his girlfriend and her peers. One particular style, however, led him to take the brand more seriously. After sharing a sweater he made featuring SZA’s ctrl album art, Childers found his work embraced by the artist and her fans, with SZA posting about his work and asking to collaborate on merch. While the latter fell through, Childers recalled he got about 45 orders for the ctrl sweater overnight, with the design still at the top of his best selling list.

Still, Childers didn't expect Frayed Label to grow to over 7,000 followers. "It’s not that I’m embarrassed of it; it’s just not my original idea, and that sticks with me," he said. "I make the sweaters by hand, I design them and everything, but it’s not 100 percent something I can take credit for. [SZA] made me start to take it seriously," Childers said. "I filed an LLC and bumped my prices a bit." Now, Frayed Label carries an array of musical designs Childers knows will be popular with fans,, from Frank Ocean to Lauryn Hill.

While he can’t credit himself with the initial idea behind Frayed Label, Childers is differentiating himself from the other blanket sweater labels on Instagram. Instead of producing limited edition drops, or one-of-a-kind designs, he’s more focused on making sure everyone gets the sweater they want via pre-orders. Which, as a one-man team, can be overwhelming. "Around Christmas, I had way too many [orders], and I was working right up until the USPS shipping deadline," Childers said. "It was hectic, but I’m trying to get everyone a sweater… that just means I can’t make as many."

Each blanket sweater is one-of-a-kind, and so, it seems, are their makers.

In the future, Childers plans to offer one-of-a-kind drops on a monthly schedule, with the profits donated to charity. But no matter what, his main goal is to ensure everyone who wants a Frayed Label blanket sweater gets one.

"A lot of people aren’t open with their process, but anyone who asks, I’ll tell," Childers said. For those who want a sweater, but can’t fork out the $200 Frayed Label (and similar labels) charge, he is "exposing" how to make the sweaters. Basically, Childers said, he aligns his designs on a woven blanket online — similar to this one, which comes printed with whatever photo you upload to its site. Ordering his costs Childers about $80 and a three week waiting period.

After he receives the custom blanket, he’s able to cut out a pattern and sew the sweater together. It’s easier said than done — Childers admitted he spent around $300 on blankets on initial prototypes — so he hopes to release his own template so people don’t make the same costly mistakes. For now, Childers is bringing more affordable designs to Frayed Label, including bags and jeans with blanket patches. It seems like a natural evolution for the comprehensive brand.

While the idea of blanket sweaters isn’t unique to him, Childers is using his designs to create an inclusive community, rather than feed into the exclusivity that often surrounds popular streetwear. That, in itself, differentiates him from the other creators, just as Worship’s message of admiration and appreciation separates Johnson from the rest. Each blanket sweater is one-of-a-kind, and so, it seems, are their makers.