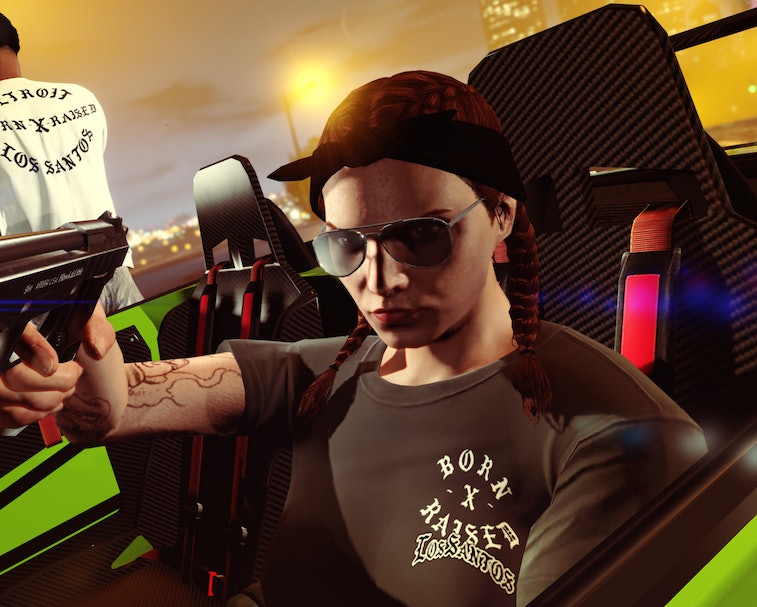 Two T-shirts can be acquired in two different ways by players. The black tee with Born x Raised’s signature Gothic font can be purchased in any of the game’s clothing stores, while the version is unlocked by completing a Robbery Contract Finale.

Moodymann, based on the IRL DJ whose real name is Kenny Dixon Jr., will also wear a custom Born x Raised jacket that was specifically requested for inclusion in the game. The streetwear brand made the real-life jacket featuring a “D’ for his hometown of Detroit, and now his character is the only one who gets to wear it in the video game.

The perfect brand to come to GTA V — Born x Raised is steeped in Los Angeles’ Chicano culture, and the brand is one of the main reasons why the Gothic font became ubiquitous in streetwear. Artist and designer Cali Thornhill DeWitt used the same font for Kanye West’s “Pablo” merch, and it became so popular that Forever 21 inevitably ripped it off.

GTA V and its Online mode pull heavily from L.A. gang and car culture, making it a natural partner for Born x Raised. And as we saw from the jump with Animal Crossing: New Horizon last year, there’s a significant appetite for real-life clothing inside video games, and vice versa.

“Grand Theft Auto’s impact on video game and broader culture in general is undeniable,” Born x Raised founder Spanto said in a press release. “And even though the game is fantasy, there are some Los Santos narrative threads that closely align to Born x Raised’s origin story in Los Angeles. Thank you to Moodymann for the special request to bring us into his narrative — we are exciting to be partnering with Rockstar Games in this way, and we look forward to seeing where this collaboration takes us next.”

GTA Online’s “Los Santos Tuners” update is available now — but be patient, as Born x Raised’s white T-shirt may take 72 hours to show up after unlocking.