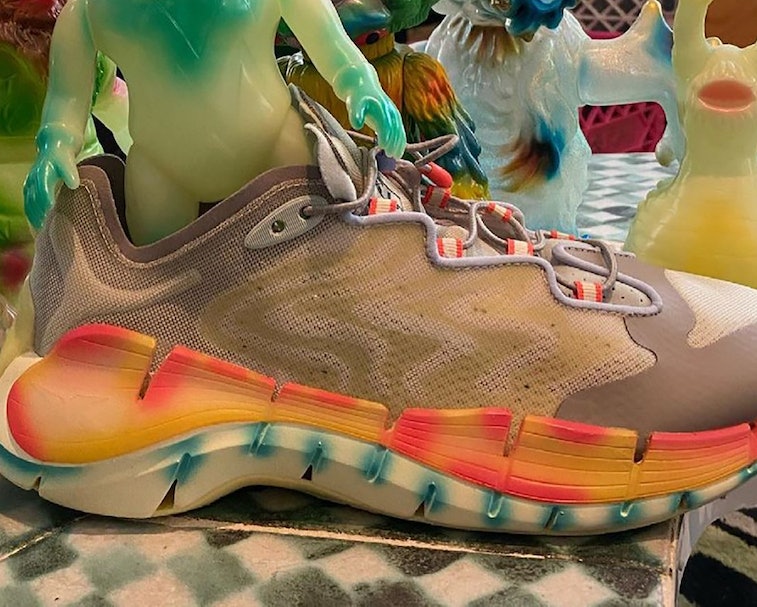 Reebok isn’t necessarily known for its hype, but its lineup of recent collaborations says otherwise. After partnering with BAPE and working with Maison Margiela to create a split-toe sneaker, the brand is teaming up with familiar collaborator Brain Dead. The two have partnered before on iterations of Reebok’s classic Pump Court and Beatnik sneakers, but will now revamp the brand’s new Zig Kinetica II silhouette.

As a brand that describes itself as being “defined by disruption,” Brain Dead is known for reinterpreting classic silhouettes and patterns. Last year, the brand debuted a Chuck 70 with Converse, covering the high-top sneaker in cow print and raising it to new heights with a major platform. While no height has been added to Brain Dead and Reebok’s Zig Kinetica II, recent pictures of the shoe prove it’s been completely transformed.

The sneaker’s stand-out feature, though, is no doubt its sole unit. Overlapping midsole molds contrast each other while adding dimension to the eye-catching shoe. A white and teal mixture dresses the bottom sole, while the top mold sports a groovy orange and yellow combination.

Hype for Reebok — Neither Gamboa nor Ng shared further details on the Zig Kinetica II, but have certainly succeeded in building up hype for the collaboration. We seem to be in the midst of Reebok’s renaissance: This sneaker isn’t just desirable, it’s straight-up sexy.

The release date and price point haven’t been announced, but given Gamboa and Ng’s posts, a drop should be headed our way soon. The creative sneaker will most likely come with equally cool packaging — perhaps even including one of the Sofubi! toys it’s modeled after. As long as we score Brain Dead and Reebok’s Zig Kinetica II, though, we don’t really care how it gets to us.