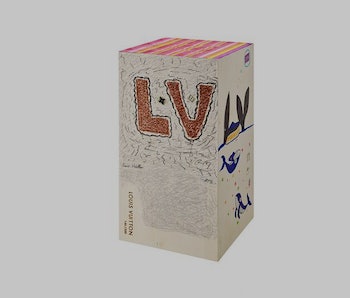 Louis Vuitton, in celebration of its founder’s 200th birthday, has recruited 200 collaborators from around the world to design commemorative iterations of the brand’s first, and perhaps most famous product: the iconic LV trunk. First produced in 1854 by Louis Vuitton himself, the luggage has been wildly altered by the bicentennial project’s contributors, with variations bearing everything from drawings of carrots to religious tapestries.

Faye McLeod, the visual image director of Louis Vuitton, told the New York Times that the brand wanted an assortment of “visionaries” who could “capture the spirit” of Mr. Vuitton. These people were advised to think of their trunks “as a vessel: for an object, a dream, a future, a reflection, a desire,” McLeod continued.

One-of-a-kind designs — The 200 visionaries tapped for the project include Drake and Gloria Steinem, as well as LVMH designers like Marc Jacobs and Kim Jones. Famous faces representing Louis Vuitton — like Virgil Abloh, its menswear artistic director, and BTS, the Korean boy band serving as LV’s brand ambassadors — were also incorporated into the list of people asked to make or decorate trunks. Abloh was “very, very involved,” Ansel Thompson, the team’s art director, told the NYT.

Each contributor was given a classic Louis Vuitton box and told they could rework the luggage through painting, sculpting, videos, photographs, augmented reality, and even sound. LV also encouraged the collaborators to redefine the trunk’s shape, if they wanted to.

Members of BTS covered their trunk in cartoonish drawings of whales, stripes, arrows, hearts, and a large carrot. Other iterations of the luggage are less tame: There are trunks covered in greenery (by Mr. Flower Fantastic) and tapestry (by Qualeasha Wood), as well as a trunk that flies — made by a French aeronautical designer and tested recently inside the LV store on Place Vendôme in Paris. Vuitton’s classic luggage also comes dressed in jelly, mini-balloons, stainless steel, and the founder’s own astrological chart.

See for yourself — Starting August 4 — Louis Vuitton’s birthday — images of the collaborative trunks will be displayed in Louis Vuitton store windows for 100 days. The brand’s Fifth Avenue store will also feature a massive digital image of Mr. Vuitton, with an accompanying graphic reading “Happy Birthday Louis.”

Eventually, Louis Vuitton plans to release a book chronicling its 200 partnerships while auctioning off the trunks for charity through Sotheby’s. For each box, the brand has pledged 10,000 euros (roughly $11,800) to charity; contributors were given a list of 15 global arts education nonprofits to designate their donation. Consider it a generous birthday gift.