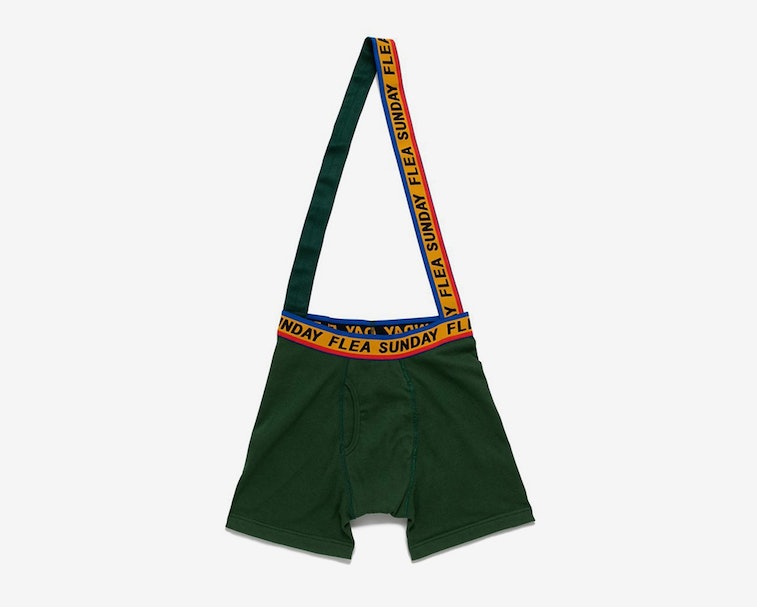 Cactus Plant Flea Market is preparing to launch a collection full of goods made in Japan, but what's catching our eyes most isn't the quality we've come to expect from the country. As part of the collection, the enigmatic brand from Cynthia Lu will release a bag made from underwear.

The design doesn't take some sneaky upcycling approach to repurposing underwear. Instead, CPFM wants you to carry a set of drawers. The "Sunday" boxer briefs are stitched shut at the leg openings to secure your goods, while the strap is made from what looks like an elongated waistband. I'm not sure that you could call this handbag chic, exactly, but it''ll certainly draw attention.

Like the Jacquemus bag, the underwear joint says you don't take yourself too seriously. And hey, it's actually big enough to stash your stuff in.

There's a sock bag, too — If the chonies weren't weird enough for you, or perhaps not too large, how about a sock? The single crew sock bag comes with a metal clasp at the opening, a hilarious sight, as well as a metal-beaded strap. Personally, I can't wait to see somebody with a sock slung over their shoulders walking around SoHo.

The Japan-Made collection will also include more normal apparel, including a pair of "Tuesday" boxer briefs meant for wear in its original purpose. A "Rave Cowboy" pullover makes excellent use of colorful fleece, while the fuzzy "Dumb" cardigan gets its name from embroidering that very word over one of the pockets. Also covetable is the "Double Vision" flannel, which applies Cactus Plant Flea Market's smiley face motif in two chenille patches.

All of the jawnz will go up for sale this Saturday, November 21, through both Cactus Plant Flea Market and Human Made's websites. Full pricing details have yet to be announced, but they will range from $40 to $575. Hopefully, the sock and underwear bags will fall on the lower end of the spectrum considering they're, you know, socks and underwear. And even if you don't want to spend your money on such frivolous things, it could provide inspo for a nice DIY project as COVID-19 cases continue to spike.