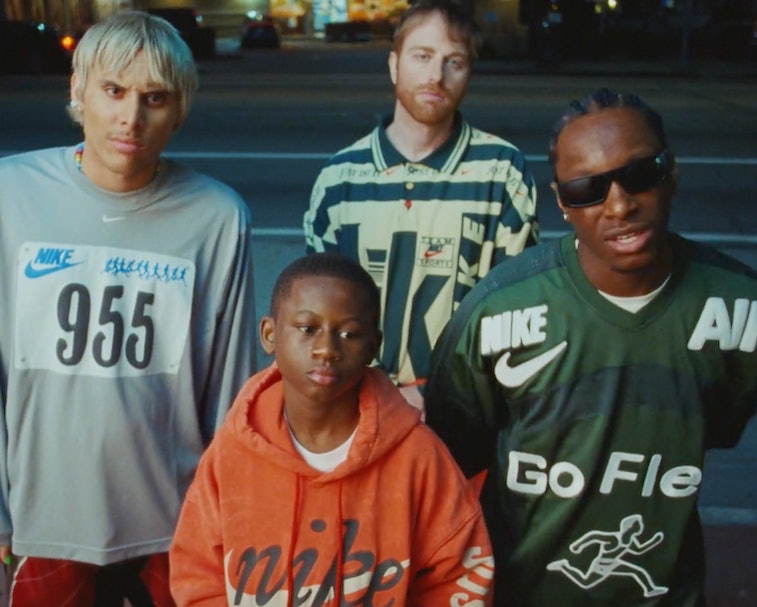 Cactus Plant Flea Market and Nike are once again teaming up on an apparel collection, this time bringing the DIY brand’s love for puff print to a variety of sports. Just like their first collaboration, a hockey jersey is in the mix — and it’s now joined by long sleeve shirts pulled from soccer and marathons.

Cactus Plant Flea Market debuted the collaboration through a five-minute short film posted to its website and Instagram account. And with just a day to spare until the garms drop, watching the clip in full may be the only way to see the full range.

The meta short sees models including Bloody Osiris headed to the theater to bootleg an imaginary film called Go Flea. They’re total assholes throughout, and yet everyone they come across admits they know how to dress — in their CPFM x Nike goods, of course.

Might the Dunk be restocking? — We don’t want to get your hopes up, but we’d be remiss not to note that CPFM’s Swarovski crystal-covered Dunk makes an appearance in the film. Its inclusion by no means guarantees it’ll go on sale again, but it does raise the possibility.

Even without a Dunk restock, the new collab is full of cop-worthy sportswear. The hockey jersey, marathon shirt, and multiple hoodies are hit with puff print branding for both parties, while a long-sleeve soccer shirt calls back to the ‘90s with its bold stripes and repeating “Just Do It” graphic. There’s also a killer pair of track pants that invoke motorsports and a windbreaker that brings back the “Air Sunshine” logo from the first time around.

Prepare to cop tomorrow — There’s little time to think, as all signs point Cactus Plant Flea Market dropping the collection through its website at 9 a.m. E.T. tomorrow, March 12. The enigmatic brand is being rather cryptic about the whole thing, so prepare to see the prices in the brief window before everything sells out.

A year and a half after CPFM and Nike’s first collection dropped, the hockey jersey is still reselling for more than $500 on secondary platforms — so expect to be joined by rabid competition come mañana.