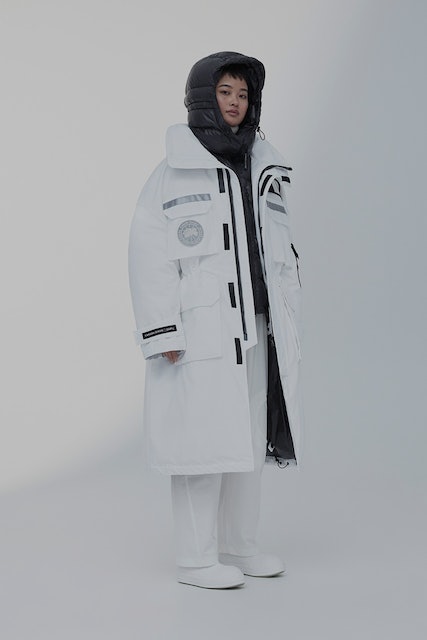 The Canada Goose jacket is already a winter status symbol, but a Korean designer has been brought in to widen the appeal from superior warmth and that ubiquitous patch.

For her second collaboration with the Canadian outfitters, Juun.J has blown up the proportions on three of Canada Goose's parkas. The Resolute Parka, Expedition Parka, and Snow Mantra Parka all come in oversized with white and black color blocking and a monochrome version of the Canada Goose patch to match. Each jacket also gets additional features to make them even more equipped for winter, including a much bigger fleece-lined neck guard on the absolutely massive Snow Mantra.

How about a threefer? — As a continuation of her first Canada Goose collaboration, the Resolute Jacket has been reconfigured with three pieces in one. A down vest and down hood — both all black — are intended to be worn with the bright white shell, but they can also be pulled out to be worn on their own in warmer temperatures.

The same down hood has been attached to the outside of the Expedition Parka, where it wraps around the shell hood to completely envelop its wearer. The most extreme of the three is the Snow Mantra Parka, which extends down to the knees and is already known as Canada Goose's warmest jacket.

All three of the pieces feature reflective stripe detailing that'll make the mostly white jackets even more visible. Canada Goose is already a go-to for those with the budget for the toastiest jackets on the market, but under Juun.J's direction, the aesthetic becomes as much, if not more of the appeal.

Dropping next week — Juun.J's collaborative capsule will launch through Canada Goose's website on November 11. You already know Canada goose ain't cheap — the Resolute and Expedition retail for $1,295, while the Snow Mantra is $1,595 — and we can expect a markup for the more fashionable makeups. But if you can afford it, you'll have a hard time finding another jacket that's as toasty as it is crispy.