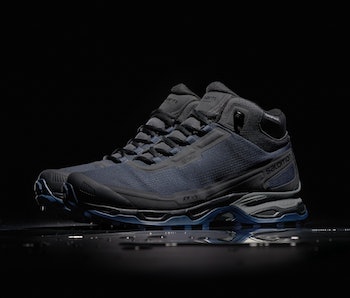 Carhartt and Salomon are like-minded brands that love to make highly functional gear tailored to very specific activities. They deviate in their audiences, as Carhartt tackles workwear and Salomon the outdoor space, but their natural proclivity for craftsmanship has come together on a picturesque sneaker-boot hybrid.

Salomon’s Shelter CSWP has been reimagined by Carhartt WIP, the Detroit-based brand’s more style-focused offshoot. The result is an absolutely stunning and relatively minimalist pair of boots that pairs black with a stealthy dark blue. If you’re looking for boots to keep your feet dry and warm, you’re not going to find a better-looking pair than these.

The Shelter CSWP is fully waterproof and partially insulated, with welded construction helping to keep the weight down while remaining sturdy. Two types of rubber are used for the sole, including a jagged Contagrip outsole that now appears in navy blue and highlights its ability to tackle aggressive terrain. The boot wouldn’t look out of place on a construction site or on a mountainside, making the collaborative Shelter CSWP a highly versatile choice for all your technical needs.

Go ahead, steal that valor — While black and navy comprise the majority of the Shelter CSWP’s scheme, hits of gray and an even fainter appearance of sand add just enough character while keeping the profile muted. Traditional Indonesian vine camouflage on the insole should add to the sense of stealth, although, frustratingly, none of the images actually show it.

Branding for the boot has been pared down with tonal black calling out the parties and technology involved, including the appearance of Carhartt’s logo on the heel. After all, it’s the color and functionality that we’re really here for, and the $195 price tag should be well worth the investment.

Salomon’s Carhartt WIP Shelter CSWP is out now through both brands’ websites and should be a sleeper hit to techwear devotees. Winter will still have a few gnarly days to throw at us in the coming months, and you’ll be able to tackle them all in style with these boots on your feet.