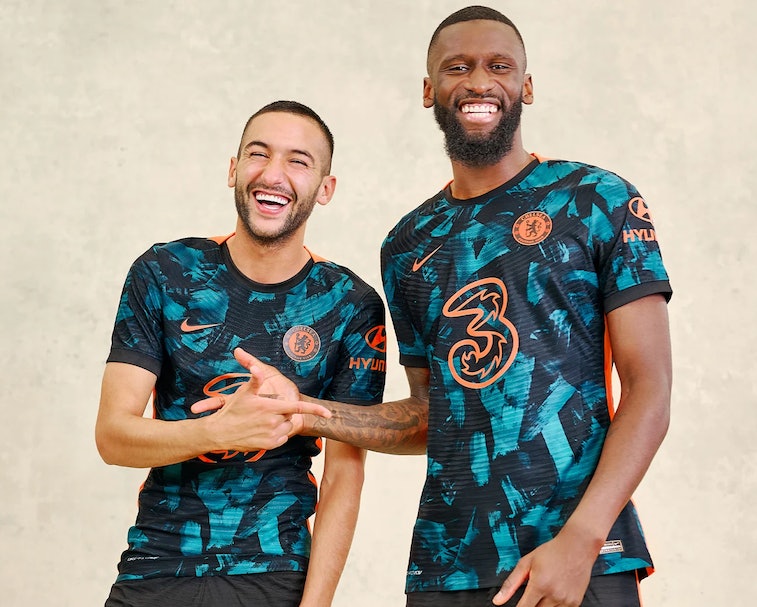 Reigning European champion Chelsea has unveiled the stunning new kit it’ll wear in the Champions League competition this season. The London club’s third kit takes inspiration from Nike ACG, the outdoor line heralded as much for its multi-climate utility as its colorful prints. And although Chelsea will inevitably face rain on match days, it’s the latter quality that shines through on the camo-like jersey.

A minty green is used in combination with black for a chaotic print the club says is intended to invoke the floodlights of Europe and streetwear jackets worn throughout London. Orange iconography, including the Chelsea badge and sponsor logo, will make the shirt stand out even more for the night games as the club seeks to repeat as Champions League winners.

The Champions League group stage will be announced today, and Chelsea will likely wait to wear its new kit until its first match in the competition. Fans won’t have to wait, though, as the jersey is already on sale now for $97 and up.

Going green — Like all of Nike’s soccer kits today, Chelsea’s new digs reduce carbon emissions for production by 30 percent by avoiding virgin polyester. Both the shirts worn by the players and the replicas sold to fans are made from 100-percent recycled polyester sourced from plastic water bottles.

Chelsea’s third kit is indeed the charm and should prove more popular than the warped checkerboard print it wears for home games and the very yellow away jersey. The club previously took inspiration from within the wider Nike umbrella with a shirt informed by the Air Max 180 that wasn’t worn on the pitch and intended for fans only. Reception was more “meh” than “Max” though, and you’d be hard-pressed to find anyone still caping for it.

Fortunately, channeling ACG is a much more worthy pursuit and puts Chelsea’s new kit amongst our favorites of the new season. If you’re not considered with allegiances and simply want the best of the best, check out the shirts worn by recently promoted Italian side Venezia FC.