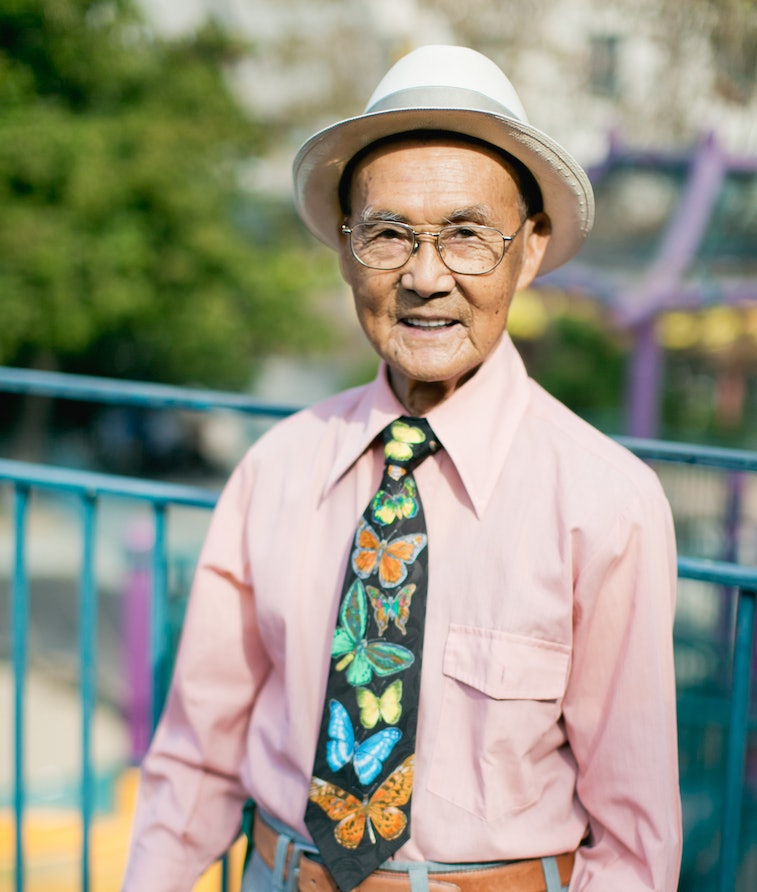 These days, the social network's currency is selfies, and popularity is determined not necessarily by originality or creativity but by consistency in uploading Reels. The issue isn't finding content on Instagram but finding content that's actually fresh.

Writer Valerie Luu and photographer Andria Lo's Chinatown Pretty project started in 2014, and the Instagram account (@chinatownpretty) launched the following year. It remains — in my opinion — one of the best sartorial accounts to take style inspirations from.

That's because the subjects on Chinatown Pretty's feed aren't your typical TikToking, YouTube-vlogging, thirsty influencer types — they're seniors from historic Chinatowns across the U.S. If style and fashion is all about confidence in rocking an outfit, the street-style kings and queens Valerie and Andria surface are certainly bursting with tons of it.

As part of our spotlight on creatives for AAPI Heritage Month, Andria peeled back the curtain to share a look at how the portraits of these stylish elderly are captured for not just the Instagram account, but a book under the same Chinatown Pretty project name.

I first learned about Chinatown Pretty around three or four years ago. I remember my little sister sending me posts of these incredibly stylish Asian seniors and me thinking damn, I hope I look as cool when I'm 75. When you look at the portraits of senior citizens on Chinatown Pretty, you’ll wonder who the people are and what the story is behind their fits, because they're definitely not dressing up to rack up likes on Instagram.

Mrs. Shen, 86, looks cooler than the anyone on your Instagram feed without even trying. This neon look? Effortless.

Clothing has always been a mechanism to reflect a person's identity. How you dress is an expression of how you see yourself and how you want the world to view you. So, of course, clothing can hold a deeper meaning.

With Chinatown Pretty, Valerie and Andria don't just showcase the beautiful, expressive, and colorful outfits of Chinatowns' seniors, but by extension, also surface their cultural stories, including ones relating to struggle, endurance, and change. Each person's piece has a layer of history threaded into its fibers. Through photography and Instagram, Chinatown Pretty is helping preserve these stories one OOTD portrait at a time.

Chinatown Pretty's aesthetic is street-style portrait photography, channeling Humans of New York vibes. Andria could have shot from a distance with a DSLR, but that wouldn't have afforded the level of intimacy needed to truly convey the stories behind the outfits. Through a translator speaking Cantonese or Toisanese — and other Southern Chinese dialects predominantly spoken in historic Chinatowns in North America — Andria and Valerie have unearthed the stories of over a hundred stylish elderly spotted on the Chinatown streets of San Francisco, Oakland, Los Angeles, Chicago, New York, and Vancouver.

"It was born out of visiting Chinatown, having dim sum dates there, and people-watching," Andria told me over the phone. "Seniors are definitely a presence in [San Francisco] Chinatown. So we'd people watch and that curiosity really led us to just try to talk to them. 'Let's just try to find out more about them.' And that's really how it started."

Though Chinatown Pretty is now a book, the project that celebrates AAPI almost didn't stick the landing.

"We pitched [Chinatown Pretty] as an article and had a great response, and actually thought this was where the article ends. It's a tricky project to do because the rejection rate [they’re turned down by about 90 percent of the seniors they approach] is so high that we didn't really think this was something we could continue. But a couple of years later we decided to resume the project when one of the local Chinatown nonprofits, Chinatown Community Development Center (CCDC for short), reached out to us and wanted to do a photo show. They were such an amazing nonprofit that we were like ‘Well, maybe with their help we can continue this project’ and that's when we started photographing and talking to seniors again."

Unlike your typical fashion influencer, most of their senior subjects need a little TLC to open up in front of the camera. "For the project, we really aim to capture portraits," says Andria. "They're looking at the camera. We basically just go say hi and strike up a conversation."

"Oftentimes, we'll compliment them on an article of clothing. 'That looks really interesting. Like that looks like it has a story, maybe something they knitted themselves.' So that kind of starts up a natural conversation."

Compliments have been the key to getting their subjects to open up and sign releases to have their photos taken and published. "We work with a translator — there are like three of us kind of like compliment bombing them. I find that so many seniors like to be talked to. I think we can remind them of their grandkids too, and maybe they don't always get those social opportunities as much — so they're happy to talk. Sometimes they're happy to tell us everything, but decline the photo."

Roaming through Chinatowns and taking photos for the 'gram might sound easy, but it's a slow process, Andria tells me. Sometimes, they'll go out and only manage to speak with one or two people during an outing. Andria and Valerie will walk around for hours and just people-watch to find seniors wearing clothing that's perhaps more deliberate in character or contextual to the environment because the other part of Chinatown Pretty is to teach people about the history of America's Chinatowns. These chats tend to be "very ephemeral" says Andria. "Sometimes it's a few minutes because we're meeting them at like bus stops. They're out grocery shopping. It's kind of busy and they got things to do. They're on the go. Sometimes we just catch them sitting at the park."

With only a few minutes, Andria needs to work fast. Andria tells me she has a shot list in mind when shooting her subjects in the streets. "I take like 10 to 15 [shots per subject]. It really depends on how much time they give us. I try to get a full-length [shot], then a close-up portrait, and then any detail shots that's just their clothing.

For the most part, Andria prefers to capture subjects in their environment — Chinatown is always the supporting character, she says. "Most everything is portraits. We do have some details of the neighborhood and some candids in the book just to kind of round out, visually, the vibe of the city and the Chinatown we're in." Andria says she might move a subject for better lighting, but that greatly depends on the timing and whether that adds to the context of the photo/story or not. "I kind of just make it work. [Seniors] don't have a lot of patience for photos, to be honest."

What is it about seniors in Chinatown that makes for such an interesting Instagram account and book, and is so appealing to younger generations?

"I think one of the values of maybe that generation of immigrants or perhaps maybe [the Southern China region] is probably resourcefulness and savings because we noticed a lot of people save a lot of their clothes for decades and they still wear them and they look wonderfully new."

“There's a lot of handmade items... You can tell there's like story history there.”

In my opinion, the fashion in Chinatown Pretty's portraits looks so hip and modern despite the joyous models wearing them all being well past retirement age because of the authenticity of the textiles, patterns, and details like stitching. "A lot of it's hand-me-down, or gifted, or clothes they've had for decades that might have been custom-made in Hong Kong. To us, it looks vintage to our generation." Whereas today's fast fashion or even vintage/thrifted outfits are facsimiles of the past, the clothing worn by the subjects in Chinatown Pretty are the originals — garments made before mass manufacturing, that has been carefully maintained throughout the decades.

"A lot of the women worked in sewing factories," Andria says. "They were seamstresses for work so there's a lot of handmade items that are part of the style. You can tell there's like story history there… A lot of it, you don't notice until you look really closely. Like, 'Oh, this is like a hand stitch cuff' or the patterns and the like tender details."

And you thought hipsters came from Brooklyn...

Chinatown Pretty, the book, features portraits and stories from six historic Chinatowns in North America, but as anybody will tell you, they are not all equal. The fashion of the seniors in these Chinatowns are very much products of their environment and where they (or their family) emigrated from.

For example, Andria says the seniors in New York City's Chinatown (Manhattan) are more difficult to approach than San Francisco's. Weather plays a big part in setting the mood for encounters. New York City in the winter is not an ideal time to go bugging bundled up seniors trying to go about their day. Andria says puffers made it hard to see what seniors might be wearing underneath; the clothing is more functional than fashionable. As such, the stylings of San Francisco's senior Asians are not representative of all elderly Asians and Chinatowns. But they arguably have the most eclectic style.

Chinatown Pretty resonates more today than it did when the very first post was published on the Instagram feed seven years ago. The past few years have been a real wake-up call for AAPI. COVID-fueled racism and violence against AAPI communities — the attacks on AAPI elderly are always the most disturbing of all — remind me how precious our culture and community are.

These stories must not be forgotten.

As an AAPI creative, I owe it to myself and to future generations, to help dismantle the concept of the model minority. I love to see writers, photographers, and filmmakers, like Valerie Luu, Andria Lo, and Andy To, respectively, are out there raising awareness about our communities through their creative endeavors.

Only real style icons can rock Lilo and Stitch.

On the surface, Chinatown Pretty is a feed or book of well-dressed seniors. But through their garments, their stories bubble up. There is wisdom stitched into their shirt sleeves and pant cuffs. These stories must not be forgotten.

🎭 AAPI Heritage Month: Spotlighting Asian American Pacific Islander creators and voices who are using their craft to inspire and elevate the AAPI community.