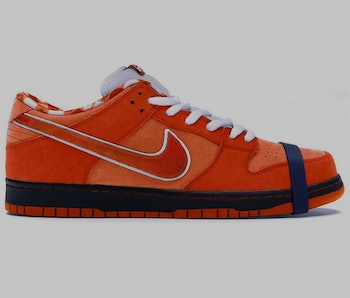 Back in 2008, Concepts and Nike SB whipped up a couple of lobsters — as in, a “Lobster” pack of Dunk Lows — and sparked one of the most coveted collections in sneaker history. Fourteen years after their first collab, the final chapter of that iconic sneaker capsule is dropping with an “Orange Lobster” iteration.

In the mood for lobster? — There are five existing “Lobster” releases in total: red, blue, yellow, purple, and green. Red, blue, and yellow were the original three, but in 2018, purple and green were formed by mixing blue with red and yellow, respectively. The orange pair, a combination of red and yellow, became an urban legend, given it was the last color blend and never released — until now.

The sneaker sports a bright orange shade on all of its main components and adds some white specks to stay on theme with the pack’s lobster motifs. Leather and suede make up the upper materials, and the white outlined Swoosh is coated in the latter. The sockliner mimics the picnic tablecloths usually found in seafood restaurants, and the tongue and laces are decked in white. Similar to the previous pairs in the pack, a rubber band is fitted around the toe as a nod to those that secure lobster claws.

Shelling out serious cash — At the start of their partnership, Boston-based Concepts wanted its Nike SB collab to be just as thoughtful as others at the time, like Jeff Staple’s “Pigeon” Dunk sneaker. Thus, the “Red Lobster” Dunk Low was born, nodding to the brand’s East Coast heritage. The first 50 pairs came packaged neatly in a wooden box with plenty of details from “Concepts Fishing Company,” including lobster claw rubber bands, butter shoelaces, and a fork and bib.

Four years after the “Red Lobster” came a special blue color scheme, accompanied by a surprise Friends and Family release of the “Yellow Lobster.” Only 34 yellow pairs were released to those working on the collab, making it so rare that StockX has one size listed at $1 million. Sotheby’s Nike SB Dunk auction also featured the “Yellow Lobster” pair, which recently sold for about $42,000. The green and purple pairs from 2018 added to the lobster mania, and the sneaker boutique raffled off some of the kicks in 2020, raising over $130,000.

Rumors of the “Orange Lobster” release are already starting to heat up, and Hypebeast suspects it’ll see a Black Friday drop. Concepts founder Deon Point once said he wasn’t sure if he would touch the Lobster theme again, but it appears he’s done some fishing since.