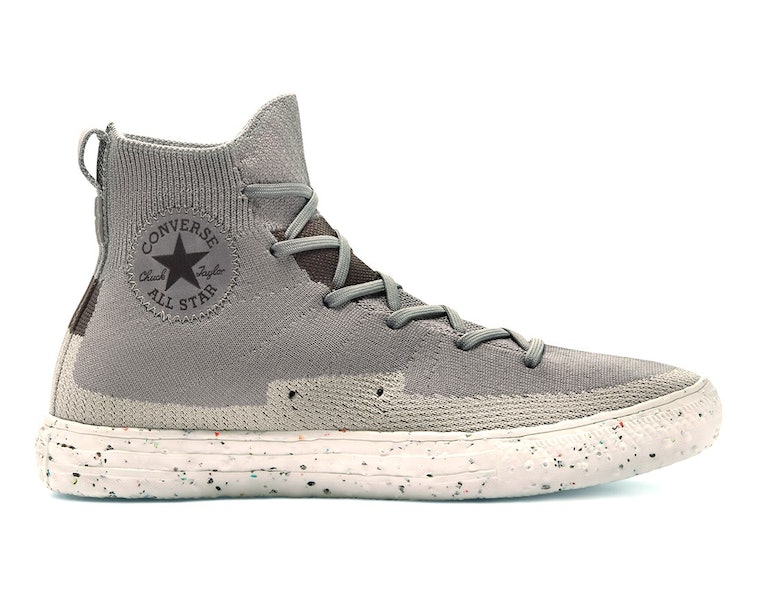 Converse never seems to run out of ways to makeover the Chuck Taylor, and a new All-Star approaches the silhouette from two distinct angles. The Chuck Taylor All-Star Crater Knit makes use of more sustainable materials while giving it a sock-like fit that’s become popular in sneakers over the past decade.

The Chuck’s sole makes use of Nike’s Crater Foam, which is signature to the brand’s Space Hippie line and uses 12-percent recycled Nike Grind rubber along with foam materials. The knit upper is even more sustainable, as it’s made from “at least” 50-percent recycled content to go along with pull tabs, interior lining, rubber toe caps, and laces that are 100-percent recycled. Inside are eco-friendly OrthoLite insoles, although the images released so far don’t indicate whether they’re made from cork or another sustainable material.

Binding materials are also spared, as the midsole and outsole are molded into one singular piece with a speckled appearance. In addition to being more environmentally friendly than many other Chucks, the sock-like fit may make them more comfortable, too.

This isn’t Converse’s first Chuck Crater — Converse and Jordan Brand have both made use of their parent company’s Crater Foam since it was first launched last year, but this is the first time the former has paired it with a more sustainable knit upper.

The Chuck Taylor All-Star Crater Knit is slated to release in two color variants, one in tonal gray and another in white with lime green accents. On both, the classic star logo has been stitched onto the sneakers’ medial side as usual, with another knit star appearing on the heel. While laces are included, they won’t be necessary for a secure fit — appearing, as Kanye describes it, as “after the fact.”

The comfy Chucks are coming very soon — Chuck fans won’t have to wait long for the new release, as Converse is launching the Chuck Taylor All-Star Crater Knit this Friday, March 19. You’ll be able to pick up a pair for $110 —twice as much as normal Chuck but still relatively cheap — through Converse’s website.

Thanks to the sock-like upper, the knit Chucks might become even more of a go-to than your classic pair.