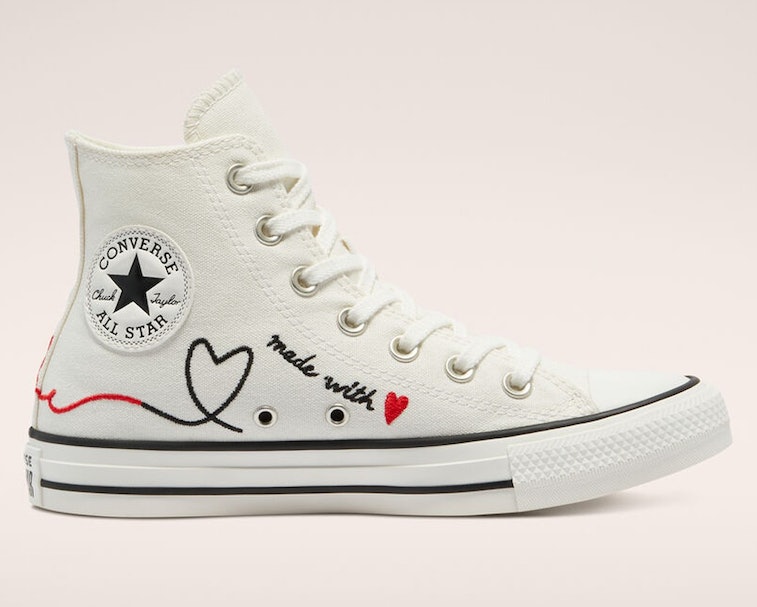 This year, there are ample opportunities to express your love through sneakers for Valentine's Day. Nike and Adidas have gotten all mushy with their kicks, and Converse is getting in on the holiday with an assortment of Chuck Taylors "Made with love."

Converse is releasing six sneakers in total for Valentine's Day, including the Chuck Taylor All Star, Chuck 70, and the chunky Chuck-based Run Star Hike. Each silhouette gets cute heart embroidery along with the tag "Made with <3."

Perhaps "Given with <3" would be a more accurate line — were the factory workers instructed to think tender thoughts while making them? — but I guess that just isn't as catchy.

Pick your love potion — The All-Star comes in either "Vintage White" or black with a sort-of scribbled heart embroidery that loops across the heel from both sides of the sneaker. Even more festive is a pink pair with an all-over print of white hearts and a lone red one that looks to be made of felt or velvet.

The Chuck 70, meanwhile, gets red and black versions without the wraparound effect. Instead, a small "Made with <3" embroidery appears on the lateral side of the kicks, and three looped hearts are stitched onto the medial. If you flip them over, you'll also see an oversized heart underneath the translucent outsole. In fact, it's so big that it's a tad difficult to make out at first — the lone flaw in this exercise of sneakers as a love language.

Rounding out the lot is a Run Star Hike, which is essentially a Chuck with a massive, lugged sole. It gets two hits of the "Made with <3" motif, with a small one on the medial side and a blown-up on the lateral.

Then scoop it up now — Converse's V-Day lineup is out now on its website, with nine days to spare before the big day of commercialized affection. Prices run from just $60 to $115 for the kicks, which makes for a modest purchase for that special Chuck lover in your life.

Should you decide to give a pair, tell that lucky person they were bought with love, too.