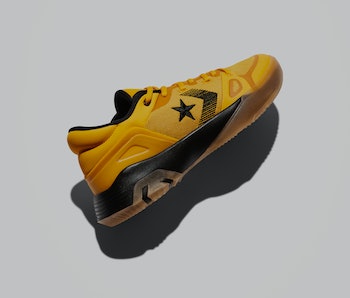 While Steph Curry is the team’s superstar, anyone who watches the Golden State Warriors play can see that Draymond Green controls the pulse of the team. Even when his stats don’t show it, Green is Dubs’ on-court leader, particularly on defense. You could say he’s the queen bee — which is the idea Converse is running with for Green’s first collaborative sneaker.

While not a signature shoe, Green has been given his own player edition of Converse’s G4 basketball sneaker. Dubbed the “Hyper Swarm,” Draymond’s yellow and black sneaker channels his “swarming” defensive playing style and the (often intense) leadership qualities he displays while running the shoe. And while Converse never overtly mentions a “queen bee” — perhaps because of some weird concern with gender implications — it does say Green’s shoe “peels back the inner workings of a beehive.”

Kicks worth buzzing about — Players without a signature shoe to call their own are often given player exclusive color schemes from the sneaker brands they’re associated with, but it’s rare for those makeups to ever go on sale. Draymond, living somewhere in the middle ground of NBA stardom, will deviate from that norm with the G4 “Hyper Swarm” slated to release at the end of May.

Fans of any team that’s gone up against the Warriors since the beginning of their title run are likely to target their hate at Green — but there are still plenty of fans who’ll jump at the chance to rock his shoe. What helps is how dynamic his G4 is, particularly compared to other Converse basketball kicks.

The yellow and black color scheme is immediately fetching, made only better by a translucent gum outsole. Converse says there’s also a bee swarm graphic on the sockliner but for some reason hasn’t revealed it in any of the images. And as much as we want to see this detail, we’ve seen enough already to say Green has a hot sneaker on his hands.

Green’s “Hyper Swarm” G4 is slated to release in limited quantities on May 26 through Converse’s website and select other retailers. Pricing has yet to be announced, but the G4 typically retails for just $110. Another benefit of Green’s middle ground of fame — it won’t jack up the price.