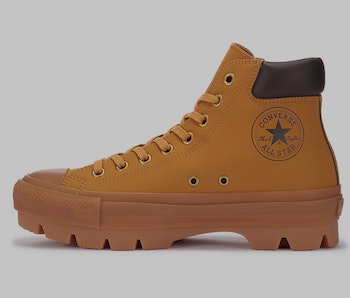 Two rights can make a wrong, as evident by Converse Japan’s newest creation. The brand took inspiration from Timberland’s iconic 6” boot and applied it to its classic All Star sneaker, resulting in a shoe that’s not quite either model. Featuring a tan leather upper, a platform gum sole, and a dark brown leather collar, the Converse serve as a Frankenstein of streetwear culture.

While punk groups and e-girls alike embrace All Stars, Timbs boast a legacy spanning beyond “deadass” memes. The boots have been referenced repeatedly in Black pop culture, Biggie Smalls’ Brooklyn shout-outs, and collaborations with brands like Supreme and OVO. Converse Japan’s sneaker version of Timbs — that doesn’t reference the actual boot brand in any official way — will likely be ridiculed for its wannabe design, which doesn’t carry the same significance as the real deal.

Mistakes were made — As part of Converse Japan’s “Brand New Vintage” collection, the sneakers call back to the original Timberland boots’ 1973 design — which hasn’t changed much over the past 48 years. A nubuck-like synthetic leather upper, heavy lug sole, and padded heel transform the All Star into a boot-like model, arriving in Timbs’ classic “Wheat” shade as well as an all-black iteration. Rubber toe caps and a leather collar make the sneaker look even more like a workboot.

In between the thick gum sole and plush collar, the All Star’s upper maintains its own legacy. Flaunting classic laces — instead of the thick rope laces often seen on Timbs — the sneaker features gold metal eyelets and Converse branding on its sides.

Just buy Timbs, my guy — It’s worth noting that the Converse that created these kicks, however, isn’t the Nike-owned brand; instead, Converse Japan operates exclusively in East Asia. But if you’re really dying to buy these bootleg sneakers (no pun intended), you can buy them on Converse Japan’s website, where the footwear retails for ￥10,450 (about $95). The All Stars are half the price of actual Timberland boots — but you get what you pay for.

Considering you also have to cough up international shipping fees, you’re better off buying the real deal. Otherwise, you’ll be ridiculed for wearing knock-off Timbs (and rightfully so).