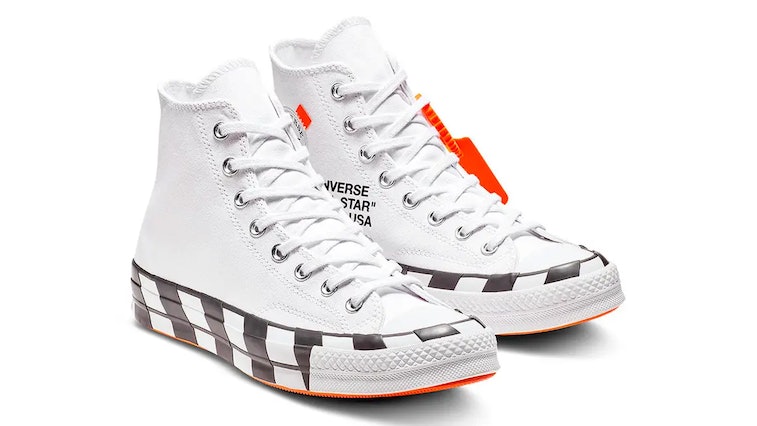 Converse kicked off the year by announcing a slew of upcoming collaborators, one of which was hypebeast favorite Off-White. The two brands partnered before in 2018 to create a coveted Chuck 70 2.0 sneaker, of which consumers either copped or paid hundreds for on the resale market. If you missed out on the original collab, however, the duo is restocking its Chuck 70 2.0 this month as part of Converse’s All-Star lineup.

Despite changing styles, demand for Off-White and Converse’s Chuck 70 2.0 hasn’t diminished much. With a mostly white upper and simple graphics, the collaborative sneaker keeps its design classic — meaning a restock three years later will still sell out in seconds. The high top, originally released as part of the renowned Off-White x Nike collection, might not be the only Off-White sneaker we see dropping from Converse, either.

A classic collab — As a restock, and not a re-release, the Chuck 70 2.0 retains its original design. Boasting a clean white canvas upper, the shoe is decorated with black medial branding for both Off-White and Converse, also including the latter’s hometown and founding year. Converse’s classic “All Star” branding further adds to the medial design, while the lateral side of the shoe keeps its white canvas blank.

Bold orange detailing appears throughout the shoe, with hits accenting Converse’s medial branding and the sneaker’s rubber outsole. Off-White’s recognizable orange zip-tie feature makes an appearance too, cementing the Chuck 70 2.0 as part of the original capsule that shook the sneaker game a few years ago.

Off-White’s signature black and white stripes dress up the shoe’s rubber midsole, contrasting the underlying orange outsole. Additional Converse branding appears on the back of the midsole, flipped upside down for a slightly remixed look.

Dropping in less than a week — The Chuck 70 2.0 hasn’t been unrecognizably altered or transformed — like other upcoming collaborations — but the shoe does mark a moment in sneaker history, and that’s worth something. Plus, the high top’s design goes with everything, adding hype to any of your fits.

So far, Off-White and Converse’s sneaker is set to release on March 30 through Converse UK, but we’re expecting the collaborative shoe to arrive stateside sometime soon, too. If you don’t want to miss out on the silhouette again, though, you might want to play it safe and cough up the international shipping. After all, with demand still high, resellers will be looking to make a profit off the shoe — and even with overseas shipping, we guarantee the retail price will be better than fees on StockX.