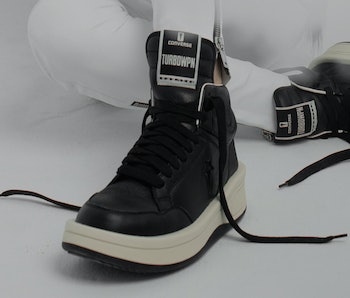 Ever since Converse announced it would bring back the Weapon, we’ve been eagerly awaiting Rick Owens’ take on the iconic ‘80s basketball sneaker. The day of darkness has finally arrived, as the basketball-turned-lifestyle shoe transforms once again into something more gothic.

Dubbed the Converse x DRKSHDW TURBOWPN, the high-top sneaker is given an oversized and simplified sole unit that protrudes outward from all angles. The upper, meanwhile, is largely left alone but completely blacked out. And similar to Owens’ Chuck Taylor released earlier this summer, an oversized tongue climbs up to the heavens with a patch bearing the sneaker’s name.

Right away, Owens’ Weapon looks more easily wearable than his Chucks. The latter sneaker has proven more comfortable than appearances suggest, but the square lines are likely to turn off those not utterly devoted to all things Rick. His Weapon, though, is a more straightforward bid for a fashionable update with only slightly offbeat detailing.

The CX Foam remains — While the midsole has been visibly streamlined, the TURBOPWN still uses the same CX Foam that helps define the return of the Weapon. Along with padding tucked into the upper, Converse’s proprietary cushioning provides all-day comfort in a sneaker you wouldn’t otherwise expect. So although the TURBOPWN is an obvious choice for, say, Berghain, you could easily wear it while logging miles walking in Berlin beforehand.

“When I discovered how powerful just oversizing something a little bit was, which I've done with a lot of my clothes, that became one of my tools,” Owens said in a release. Of the recurring motifs in his Converse line, he added, “One of the main things that I think it suggests is empathy and consideration of systems of living that might not be standard.”

Who knows if a slightly off-kilter sneaker will make you more empathetic of people not like yourself, but it sure as hell does look cool. Owens’ TURBOPWN will go on sale August 31 through the Rick Owens and Converse websites as well as select other retailers. Pricing has yet to be announced, but the Rick Chucks came without a significant upcharge at just $170.