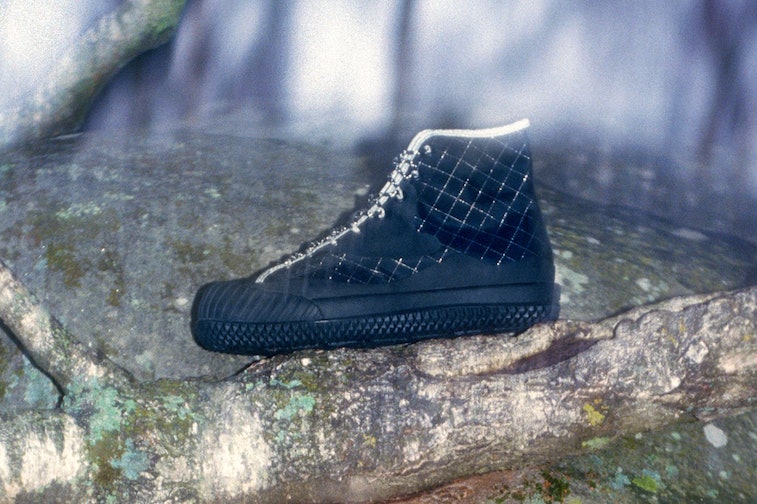 Slam Jam has announced its second collaboration with Converse, and this time around its taking a more indirect path on the classic Chuck Taylor. The two brands have partnered on high- and low-top versions of the “Bosey MC,” a sneaker/boot hybrid that takes inspiration from an archival ‘50s wading boot and Converse’s most famous silhouette.

Under Slam Jam’s stead, the Bosey MC’s outdoor origins become even more clear with a water-resistant ripstop upper featuring diamond paneling. Both the sole and a reinforced toe cap are made from a durable rubber, and metallic accents come as part of the boot-like speed lacing system.

Giving the shoe its luster is reflective 3M detailing, which can be seen when the collar and diamond pattern are hit with light. This effect is even more transfixing on the low-top version decked out fully in white.

Are you going high or low? — The high-top version of the Bosey MC, which comes in all-black with 3M providing contrast, is the more out-and-out boot — but the low-top “Ox” sneaker comes with the same aggressive tread and ribbed toe panel. Water resistance won’t be as useful when your ankles are exposed, but the Ox is nonetheless an attractive all-white sneaker that can do a lot more than, say, an Air Force 1.

Slam Jam and Converse are releasing gorpy apparel to go along with the kicks, including a pair of zip-up fleeces and ripstop track pants that should help keep your legs dry. And if you just want some branded gear, that’s accounted for too with a contrast zipper hoodie and a longsleeve T-shirt. Of the lot, it’s gotta be the snowy sherpa that’s most appealing.

Dropping this week — The full collection will first become available through Slam Jam’s webstore and physical locations this Saturday, March 20. Converse will then give it another go on its website March 25.

It may seem a tad late in the season to be dropping fleeces, but otherwise Slam Jam and Converse have come through as an unexpected source of choice gorp for the spring.