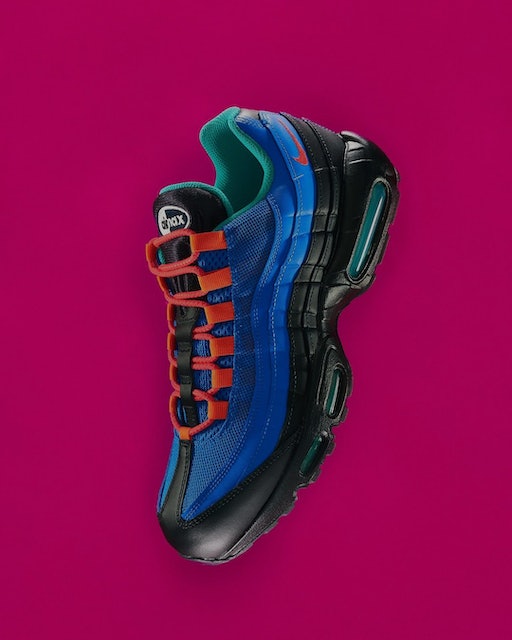 Back in 2018, Nike linked with Coral Studios for an extremely limited Air Max 95 inspired by the Great Barrier Reef. Only 50 pairs were released through a live raffle at Lapstone & Hammer — no accusations of fraud there — and proceeds were split between The Great Barrier Reef Foundation and One Day at a Time, an organization that supports the homeless population in Philadelphia.

What was released as a niche collaboration with a small marketing agency and creative collective has since become a hot commodity — a pair was Uber-ed across two cities just for Virgil Abloh — and now Coral Studio is bringing back a V2 version of its colorful Air Max 95 as a "love letter to our supporters who were unable to purchase the first version."

The biggest change is a striped upper now rendered in leather instead of suede, but the color blocking remains the same down to the orange lacing system and pink Swooshes. The coolest detail of all, though, may just be the box that symbolizes the dire situation the Great Barrier Reef is in.

Please recycle — As you may know, the world's largest coral reef is already half dead because of us dumb humans and our determination to heat the globe. Soon, one of the few tangible reminders of Australia's natural wonder could be these kicks.

As an acknowledgment of the havoc we've reeked on the Great Barrier Reef, Coral Studios has made a specialized box that collapses easily for recycling (or storage). This bit of sustainable encouragement isn't exactly going to fix the climate crisis alone, but it's a smart detail that will, hopefully, remind consumers to do their part in protecting this precious home of ours.

Ismaila Traore, founder of Coral Studios, chose the name because of the importance of coral reefs to the ocean's ecosystem. The Great Barrier Reef, with its network of more than 3,000 individual reefs over 214,000 square miles, supports more than 1,625 types of fish, 500 species of whales and dolphins, and 133 varieties of sharks and rays alone, according to the Australian government.

"We wanted our company to mimic those features," Traore told Hart Copy, an excellent archival sneaker account on Instagram. "Super small and niche but heavy-handed in our impact in the industries we touch. We try our best to be intentional with our messaging to create memorable takeaways and experiences."

Due in Spring — Coral Studios has only said its Air Max 95 V2 will release this spring, and we should expect to see a much larger production run if the whole "love letter" thing is true.

The agency, which maintains its own store, remains in close partnership with The Great Barrier Reef Foundation and donates a portion of all its sales to the organization. By linking up with Nike again, Coral Studios should be able to direct a nice little windfall over its way.