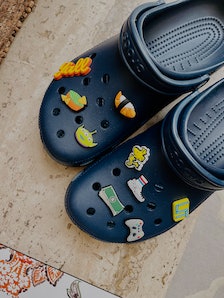 There’s no question that Crocs were the official shoe of quarantine, and new financial reports from the brand only prove it. Collaborations, new designs, and celebrity hype have boosted Crocs’ share price to an all-time high — much to Victoria Beckham’s dismay, who said she would “rather die” than wear a pair of the rubber clogs.

Beckham is in the minority, though. Even before quarantine began, Crocs was planting its roots in streetwear through collaborations with Post Malone and Chinatown Market. Since last year, the brand has also partnered with Bad Bunny, Rico Nasty, Balenciaga, and Justin Bieber, and even hired a former Nike executive to oversee its huge period of growth. With each drop selling out in minutes, rivaling footwear brands like Nike and Adidas, Crocs has established itself as the top-selling slipper.

Everyone’s rocking Crocs — So, it shouldn’t come as a surprise that in its first quarter of this year, Crocs reported record sales and an increase in its sales outlook for the full year, which led to a 16 percent stock increase. CNBC reports the brand’s revenues grew a whopping 64 percent — going from $281.2 million a year earlier to its current $460.1 million — far exceeding predictions. Net income for Crocs also grew to $98.4 million, or $1.47 per share, compared with $11.1 million, or 16 cents per share, a year earlier, CNBC added.

Crocs CEO Andrew Rees told CNBC that demand for the Crocs brand is “stronger than ever” across the world, especially with many working from home and seeking comfort. But even as people are vaccinated and venturing out into the world again, the brand doesn’t expect its revenue to decrease. Its constant celebrity collaborations — and endorsements — have made the rubber slippers as coveted as some of the hottest sneakers.

“Collaborations are important to our brand, but to work, they have to be meaningful,” Michelle Poole, Crocs senior VP of global product and marketing, told Highsnobiety. “Our clog serves as a blank canvas that can fuel the latest trends or conversations. This is why we think we’re becoming more relevant in the streetwear space.”

Accessibility is key — While the demand for Crocs is still rising — making some of the brand’s silhouettes hard or pricy to obtain — most of its models are decently affordable, boosting the shoes’ popularity even more. Unlike most streetwear drops, the slippers are actually accessible, with the average Croc slipper costing $50, and past collaborations averaging around $60 to $70. Maybe the style world can take a hint from the growing Croc empire — accessibility can make a brand just as successful as hyped collabs.