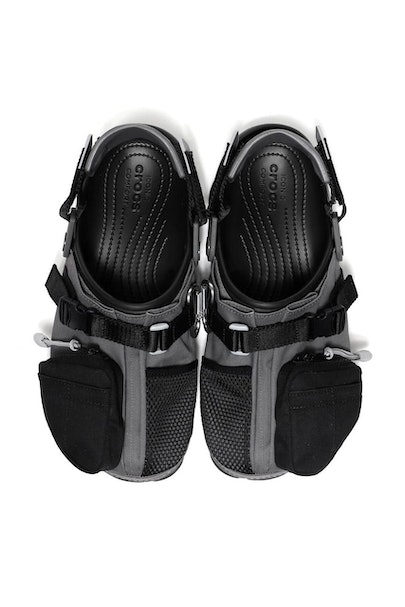 While many adopted the Croc slipper as a quarantine staple, it looks like the shoes aren’t going anywhere post-pandemic. The brand has teamed up with Beams to create two ultimate sport-mode Crocs, complete with pockets, netting, and even a carabiner-encompassing strap. Set to release in the near future, the upcoming release follows the two brands’ 2020 collaboration that combined the Croc silhouette with designs from fishing vests and buckles — but this time around, Beams has opted for a more military-esque approach.

The collaboration comes as Crocs reaches its peak, culturally and financially. Just last week, the company announced its share prices had reached an all-time high, with its revenues growing a whopping 64 percent over the past year. Collaborations with the likes of Post Malone, Bad Bunny, Balenciaga, and Justin Bieber have all helped the brand’s success. Changes inside Crocs, like its hire of a former Nike executive to oversee its huge period of growth, have also supported the brand financially. Now, the slipper company is rivaling other footwear brands like Nike and Adidas, with each of its drops selling out in mere minutes. Crocs’ partnership with Beams only caters to a new audience of gorp-lovers and outdoor enthusiasts.

Finally, a Croc for adventuring — Beams has crafted two different Crocs — “Outdoor” and “Military” — perhaps keeping each of the aforementioned groups in mind. Just as there are different types of sneakerheads, there are varying types of people who like the outdoors, and each should have a respective Croc design. For added variety, each model will come in utilitarian shades like olive, black, and gray, with one particular pair featuring a signature military look by adding bright orange accents.

“Outdoor” Crocs align more with Beams’ past designs, sporting a pocket reminiscent of fishing vests alongside a fabric covering, netting, and a carabiner-encompassing strap. The “Military” design, on the other hand, opts for multiple webbing straps across the upper, encouraging wearers to secure the accompanying oversized pouch (or other outdoor tools) in place on the front of their feet. According to the Beams website, the latter makeup nods to helmet bags and MA-1 bomber jackets.

Each collaborative Croc has been beefed up from the original Croc silhouette, ensuring that consumers can wear their slippers on any terrain. And with function taking priority over their fashion, the shoes keep branding to a minimal. Beams logos appear in a tiny font on the strap clasp while Croc branding appears on the grippy insole.

You’ll have to order overseas — Beams and Crocs have prepared four iterations of their collaborative slippers for pre-order on the Beams website, ready to be shipped out by early June. With Beams located in Japan, each utilitarian Croc will run for ¥ 8,580 JPY, or about $79 USD, but even with the addition of international shipping, the price isn't horrible. Besides, if you’re looking for functional Croc options, these are your best bet.