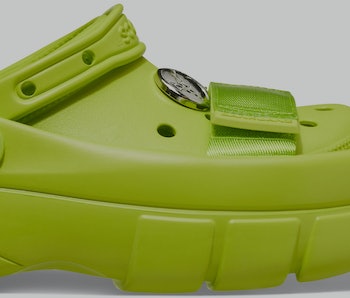 Crocs collaborations seem to be getting more daring. After a year-plus of grabbing people’s attention with high-profile partnerships and seeing an unlikely rise to the center of fashionable conversations, the brand appears to be giving its collaborators an even wider leash to play with its classic foam clog.

Just last week, in-demand sneaker designer Salehe Bembury unveiled a completely new Crocs silhouette with sweeping lines to rival the Yeezy Foam Runner or any other high-fashion Crocs imitator. And now another clever take on the Classic Clog sees the shoe wrapped in another shoe, courtesy of the Chinese label Sankuanz.

The upcoming Croc-within-a-Croc puts a removable shell around the perimeter of the sneaker, with two additional straps for security. No longer will you have to worry about your Crocs getting dirty, as there’s a husk of a Croc to dive in front of the bullet. The design brings a bit of tongue-in-cheek utility to the foam clogs, but we do have to admit the secondary shoe does look tough as hell.

“Shoes for Shoes” — Sankuanz’s collaboration harkens back to its fall 2018 runway show, where the label showed a bulky sneaker protector that could be affixed to whatever you want to shield. There are certainly sneakerheads neurotic enough to go to such extreme lengths to keep their shoes unsoiled, and the over-the-top design is probably best seen as a joke at their expense.

Sneakerheads will also be reminded of Tom Sachs Nike Mars Yard Overshoe. Inside the waterproof Dyneema shroud is the highly covetable Mars Yard 2.0, which now sells for at least $5,000 a pop. Many sneakerheads wanted the unadorned shoe so much that they cut up the overshoe” to reveal the shoe underneath — but the outer sole shell can’t be removed without seriously compromising the whole thing.

Crocs’ collaboration with Sankuanz is scheduled to release August 5 exclusively through Foot Locker’s GreenHouse app. The Croc and its Croc shell will come in neon green, white, or black and sell for $139 a pair — roughly twice as much as we’re used to spending on Crocs. That must just be the price of peace of mind, or if not that, then some seriously honkin’ steps.