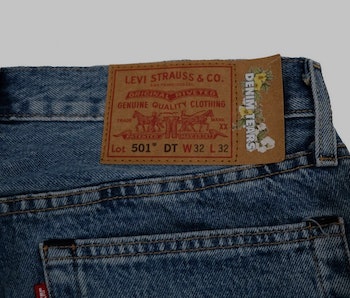 Early last year, Denim Tears released a collaborative capsule with Levi’s using denim to explore the history of cotton and slavery in America. For designer Tremaine Emory, cotton is woven into his family history, as he’s one of the first Emory’s to not pick cotton as either a job or a slave. A cotton wreath in his home serves as a reminder of that history, and the motif has been a through-line in his work including in print on his Levi’s.

Instead of being a one-off, Denim Tears partnership is going long-term with a two-year deal to continue their releases on a bi-weekly basis. The first limited-edition release under the new deal introduces the “Plain Jane,” a pair of 501 jeans inspired by the 1954 cut with a straight fit through the seat and thigh, and a slightly tapered leg.

As jeans once again trend bigger, the Plain Jane is the perfect roomy fit as we (finally) get away from skinny jeans. But the real appeal is in the deeper significance and in supporting one of the most exciting new Black designers around.

It’s the little things — Unlike his first Levi’s collection, the Plain Jane denim is more subtle in its details. Jeans in white, raw, and a vintage wash replicating vintage denim feature “Denim Tears” over a cotton plant on the leather patch, while “Tears” appears on the backside of the iconic red tag. The former iconography is also printed inside the jeans on the pocket, reinforcing Emory’s reclamation of cotton’s legacy.

Emory spoke about his intentions with Levi’s in a Vogue interview last year that shows storytelling in fashion at its best. “For the 400-year anniversary of slavery, The New York Times did this amazing series of podcasts — but how many 16-year-olds are reading The New York Times?” he said. “We need to find new modes of conversation, new ways to send smoke signals about old stories — and these aren’t just black stories, they’re human stories, American stories. If you go to a therapist, the first thing they’re going to ask you is: What was your childhood like? So: What was the childhood of America? Understanding that is going to help us understand and fix what’s going on now.”

No wait necessary — The first new drop for Denim Tears’ Levi’s collab is live now on the former’s website, with prices ranging from $195 for the white denim up to $260 for raw. Denim Tears is also planning on re-releasing the original pieces from last year, which should only be a small fraction of what makes the bi-weekly releases worth keeping up on.