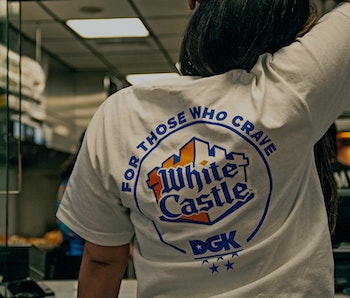 Flashback to Monday morning: It’s hovering around 90 degrees in New York, yet here I am practically falling off my seat waiting for the mailperson to deliver a pair of fleece sweatpants that I decided I — not to be dramatic — simply cannot live without. And a pair of thick, mid-calf crew socks. Okay… and a more seasonally appropriate t-shirt. I’d only ordered it all on Friday after three days salivating over the potential of this surprise drop, and getting the tracking notification that my bounty was about to arrive not one full business day later tipped my hype over the edge. You could say I was craving it.

The skate brand, short for Dirty Ghetto Kids, teased the collaboration in an Instagram post last Tuesday and more or less set its corner of the internet on fire. I immediately texted my brother upon seeing it so he could share in the anticipation, and after reposting it to my own Story to let the world know what was about to happen to my wallet, my DMs were blowing up with others getting in on the excitement. DGK clearly knows its audience.

These sweatpants are so comfy they had me actually wishing for cooler weather — just so I could wear them more.

For those who crave — The subsequent reveal did not disappoint. Hoodies, sweatpants, hats, socks bearing both the DGK and White Castle names in the fast-food chain’s signature blue, white, and orange; a comic-style graphic of a hot blonde savoring the first bite of a White Castle slider, a DGK gold ring on her pinky and the words “Crave Life” above; a graphic of two dudes sitting before a mountain of White Castle sliders and fries; five new deck designs; wheels; grip tape covered in tiny burgers. It is the Crave Case of merch drops — grab one item and you suddenly want 10 more.

Somehow, many of the designs are still in stock, but I wouldn’t wait on purchasing if you’re interested. The available sizes are steadily dwindling.

When it comes to fit and quality, DGK doesn’t miss. These sweatpants are so comfy they had me actually wishing for cooler weather — just so I could wear them more. The socks are the perfect height for the White Castle logo to be read over high-tops, and the colorway is eye-catching without being overly loud. They’re thick enough to pair with slides for a lazy day but not too thick to wear under skate shoes. On the tee, the graphic really pops and got me several compliments the first day I wore it out.

With just about everything falling in the $30-70 range, save for one $110 jacket for the most hype among us, no one could blame you for splurging and copping all of your favs rather than settling for one. It’s just too hard to pick.

For the uninitiated, it might seem like a lot of fuss for a collab with a cheap burger spot notorious for its role in nights that end in puking, but this is truly a situation of “if you know, you know.” Like 40s and 99-cent Arizona cans and meals you can craft from a late-night run to the corner store, White Castle has its own special place in the heart of the culture. And the timing of the drop couldn’t be more perfect.

The collaboration celebrates White Castle’s 100 years in existence. Enjoy the mental image of people engorging themselves with sliders while dressed in their Roarin’ ‘20s best. In DGK’s words:

In 1921, a man named Billy Ingram opened up a small hamburger stand with $700 and an idea to sell small, square hamburgers for five-cents. The concept grew to be the first hamburger chain in the world; inspiring everything from movies to pop culture with the same quality product it gained notoriety from... Stevie Williams founded [DGK] on the same authentic fundamentals that made White Castle iconic generation after generation. Both began with just an idea and changed how we look at the world. This is For Those who Crave.

As skateboarding makes its Olympic debut — something that was once unimaginable — DGK reminds us to stay true to its roots as an art form born out of the streets. It is, as always, “for those who come from nothing.”