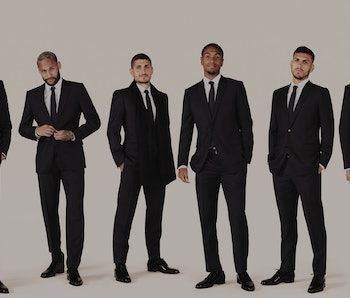 Following the blockbuster signing of Lionel Messi, Paris Saint Germain has signed Dior as a new squad member. The French luxury house has inked a two-year deal to be the official off-pitch outfitter of PSG.

Neither PSG nor Dior have yet to announce the collection going on sale to the public, but you better believe it’s coming. Led by Kim Jones, Dior has already made inroads into streetwear with an Air Jordan 1 and upcoming Travis Scott collection — and soccer is just another avenue to bring a new customer to the luxury house.

Football and fashion — PSG’s partnership with Dior follows Thom Browne outfitting FC Barcelona as part of a three-year deal signed in 2018. (You could easily believe luxury designers are chasing Messi.) During that time, the club sported Thom Browne’s signature shrunken suiting — shrunken shorts and all.

The Thom Browne x Barcelona collection is still available and includes leather accessories and a high-end upgrade for the sport’s ubiquitous scarves. Full suiting is also still for sale, as well as a short-sleeve oxford with a Barcelona crest on the pocket and a colorful jacquard cardigan.

Provided you’re a fan of either PSG or Barcelona, price is the only barrier representing your team in style. And if you’re into Js, PSG also has those covered with prolific and ongoing Air Jordan releases.