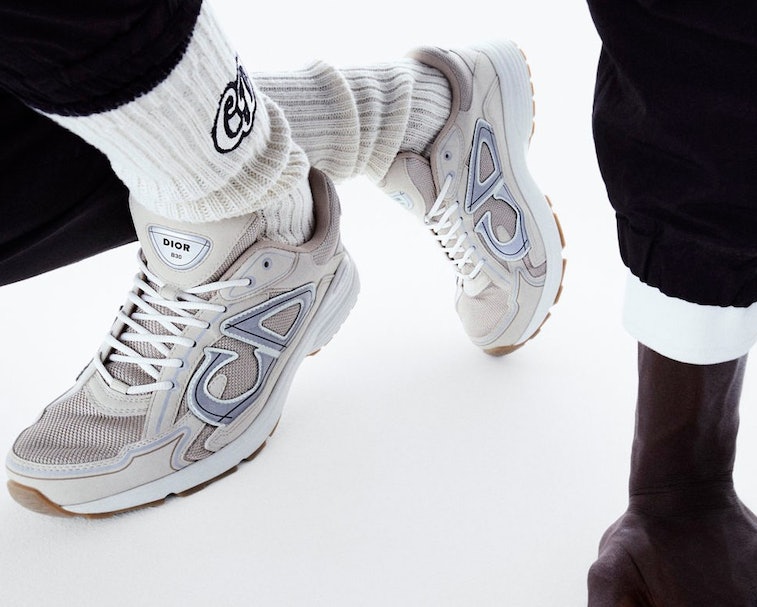 The dad shoe is showing no sign of slowing down as an objet de jour, as Dior is trotting out a luxurious take on paternal appropriation. Launching this month is the B30, a brand new running-inspired silhouette from the French luxury house that brings to mind New Balance’s fuss-free kicks.

A relatively plain mix of leather, microfiber, and mesh is used for the upper, with the standout detail coming through in an absolutely massive and reflective “CD” logo. Additional Dior patches appear on the tongue and heel, but outside of the branding, you’d be hard-pressed to distinguish the sneaker from what your father would wear while mowing the lawn.

Five color variants will be available at launch, consisting of black, white, olive, beige, and lime. All but the last are muted but tasteful, with lime being the lone peacock of the assortment.

Prepare for sticker shock — In order to get your hands on what Dior is calling “French modernism meets aerodynamic athleticism" prepare to plunk down $1,150. All five versions of the B30 are available now through Dior’s website and boutiques and are just waiting to be styled with a humble pair of washed jeans.

If you want to try it before you buy it, or just imagine what it would be like to wear a $1,150 dad shoe, Dior will allow you to try on the B30 through augmented reality on Snapchat. To check it out, just head over to Dior’s site and scan the QR code.

Dior has previously found success in its similarly named B23, a high-top sneaker that invokes the Converse Chuck Taylor but with the luxury house’s signature Oblique monogram motif. The B30 is now well-positioned for a takeover as the luxury sneaker of the moment, and don’t be surprised if it’s suddenly on all over your Instagram feed this fall.