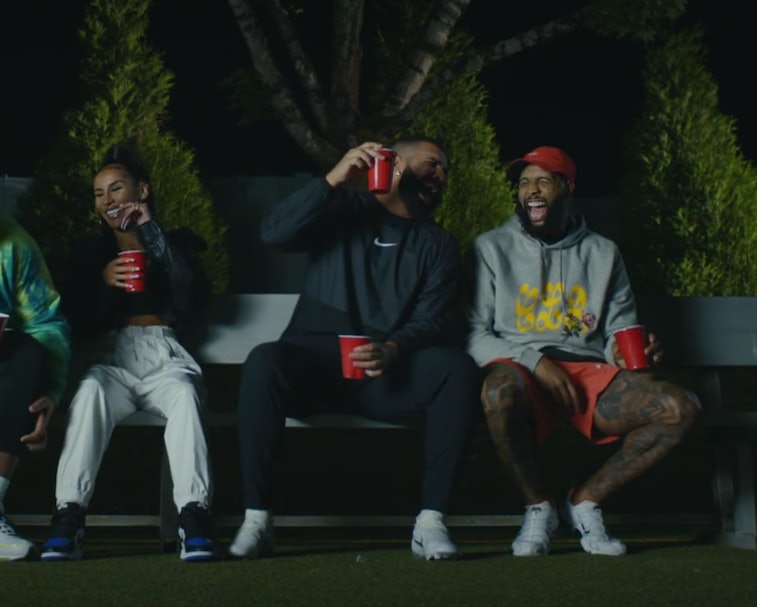 Drake released the new single "Laugh Now Cry Later" and its accompanying music video last night, kicking off the cycle for his new album Certified Lover Boy. But for sneakerheads, the most noteworthy development was Drake turning the Nike campus into his own playground for the video that may as well be an advertisement.

Drake engaged in a shopping spree at the fabled Nike employee store, got schooled by a lineup of Nike athletes, and teased a new collaboration with the Swoosh. Several new items of apparel could be spotted in the video, including an OVO workout shirt and a Certified Lover Boy hoodie worn by Odell Beckham Jr. Most intriguing was a mysterious sneaker worn by Drake throughout, which very well could be his own Nike model.

The mystery kicks — Drake can be seen wearing the all-white sneakers in several frames, and the silhouette looks nothing like Nike's existing models. The mid-ish cut kicks feature a perforated upper in what looks like leather, as well as an exposed air bubble toward the heel.

Jordan Brand has released several OVO makeups of Jordan's signature line throughout the years, but Drake still hasn't released his own model with Nike. Drake was reportedly this close to signing with rival Adidas — until Pusha T's exposure of the planned rollout coinciding with the announcement of his son ruined the deal. Drake still blames Kanye West for tipping off Pusha T, and the salt is still apparent with the line "This in between us is not like a store, this isn't a closeable gap."

Stay tuned for more — Chances are whatever Drake has cooking up with Nike will be released in conjunction with Certified Lover Boy. A release date has yet to be announced, but now that he's in full album mode it should be coming soon.