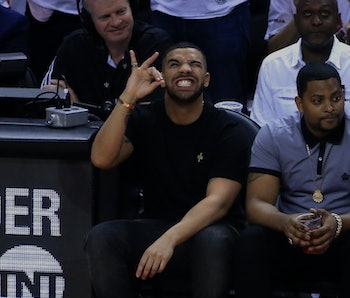 Drake’s long-awaited album Certified Lover Boy finally releases this week, and the rapper has revealed a run of Nike T-shirts will commemorate the drop date. Earlier, Drake teased tees featuring a rose-adorned Swoosh on the front, with each sporting different messages on the back — perhaps lyrics from CLB. His latest merch, however, strays from his usual sad boy sayings and veers into one we can’t believe Nike endorsed.

Made with the help of NBA Star Giannis Antetokounmpo, Drake’s newest tee reads “I Need A Freak” on its backside, with the word “Freak” written in the format of Antetokounmpo’s signature logo with the Swoosh. Towards the bottom of the T-shirt, an arched Certified Lover Boy graphic credits the line to Drake’s new album, in case the lustful messaging wasn’t hint enough.

The rapper announced members of his OVO team had previously handed out some of the T-shirts for free in Toronto, but there hasn’t been any word of a wider release. A drop will likely happen over the weekend, after the launch of Certified Lover Boy, but whether it’ll be through Drake’s Nike-backed NOCTA or on his own website has yet to be determined.

The Swoosh gets sexy? — Much of Drake’s certified love has been directed at Nike over the past years, especially with the launch of his own sub-label with the Swoosh. But with how much bad publicity the sports brand has received recently — from its failure to deliver its Off-White Dunks to the hacking of its SNKRS app — putting forward a saucy Swoosh-branded tee may not be on its agenda. On the other hand, it’s unlike Nike to pass up massive profit, which Drake’s merch promises to deliver.

Wherever the passionate T-shirts drop, there’ll be no shortage of social media love for the merch. Brace yourself for months’ worth of Certified Lover Boy tees, IG captions, and most dreadfully, texts.