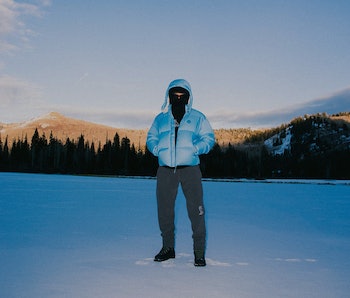 Whether he’s at his Toronto mansion or trifling in NYC, Drake isn’t one to shy away from the cold. Going off of his massive collection of puffer jackets — most of which he’s designed himself — the rapper appreciates cold weather gear, and of course, the opportunity to snuggle by the fire with his girl.

With cuffing season already underway, Drake is taking care of the former, releasing a new October’s Very Own (OVO) “Winter Survival” collection with updated outerwear pieces. Produced in Europe, the capsule was made in collaboration with Italian labs that used water-repellent fabrics and down feathers to ensure that each parka and puffer keeps wearers warm and dry (despite their icy looks).

Drip like Drake — The collection offers something for every certified lover boy, with styles ranging from classic puffers to parkas, vests, and mega puffers. Each piece features 700-fill down with OEKO-TEX® certified down feathers, meaning the outerwear is as environmentally-friendly as it is warm — Drake’s Take Care seemingly doesn’t just apply to Rihanna.

To elevate the capsule, OVO has ditched its typical logo-plastered look, instead opting for tonal black, blue, purple, silver, and white shades. The outerwear is minimalistically branded with a small graphic of OVO’s owl logo, which remains monochromatic on most items except for the smaller puffer jackets, where it takes on a yellow shade. All pieces, save for the parkas, boast a slight sheen to them for added luxury.

Alongside the outerwear, OVO has prepared accessories like trucker hats and cheetah print beanies for anyone who wants to rep the brand with some extra warmth. To feel “Way 2 Sexy,” however, fans will want to opt for a reflective balaclava — arguably the most Drake-approved item within the collection. With the headwear and an OVO puffer, people will only need a pair of gloves to complete Drake’s “uniform,” which he established last year with Nike. Just finish off with a pair of crisp Air Force 1s.

Bundle up — OVO’s “Winter Survival” collection is available now at the brand’s website, with headgear ranging from $48 to $68 and outerwear priced between $298 and $898. The pieces may be some of OVO’s most expensive yet — but, hey, no one said dressing like Drake was cheap. After all, he’s not called Champagne Papi for nothing. He’s always splashing out, and expects his fans to do the same.