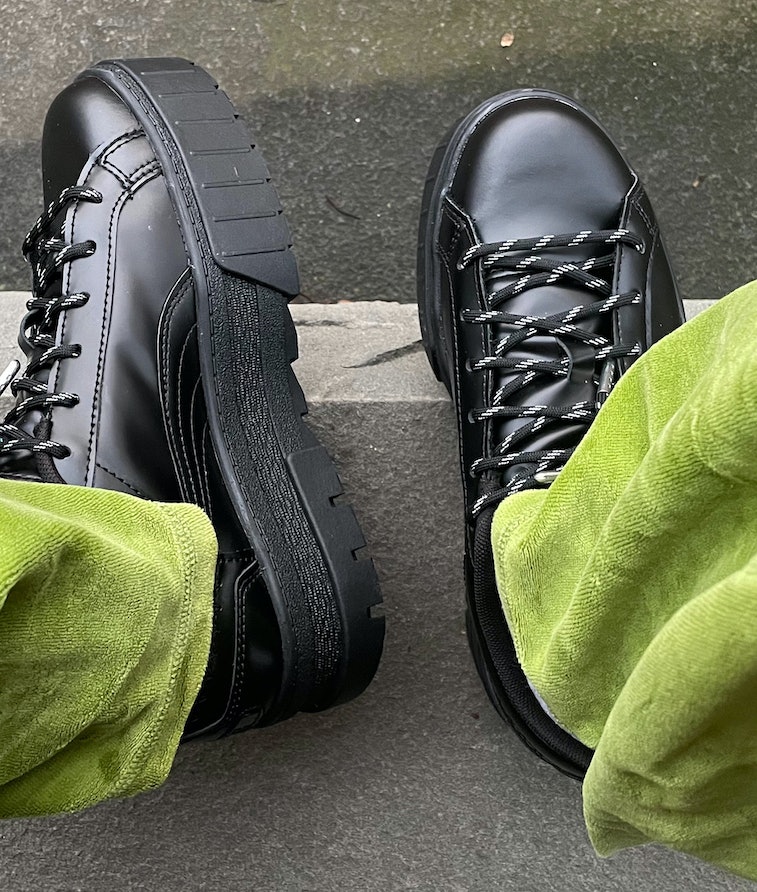 Managing a personal brand has always been a highlight of celebrities’ success, but modern collaborations have made those brands all that more lucrative.

Now, after becoming a Puma brand ambassador in 2020, Lipa has announced her first co-branded capsule with the brand, dubbed “Flutur” after the Albanian word for butterfly. The collaboration, perhaps the singer’s most accessible yet, offers ‘90s-inspired hoodies, crop tops, and Lipa’s own “Flutur” version of Puma’s Mayze sneaker — previously modeled by Dua in its debut campaign.

With a chunky midsole and signature striping, the shoe calls back to Rihanna’s iconic Fenty Puma line, one of the sportswear brand’s most successful celebrity partnerships. Rih’s innovative designs — which arguably popularized the creeper sneaker style — consistently sold out and introduced Puma to a level of celebrity hype. It’s worth asking whether Lipa’s sneaker is able to do the same, and whether her line can offer more than a celebrity name.

I’ll admit, I’m a longtime fan of Dua Lipa: Her self-titled album was my soundtrack in 2017, and that same year I even met the singer is Soho — where she was wearing Nike Air Force 1 sneakers bejeweled with her name, no less. At first glance, her new Mayze sneakers didn’t impress me as much as her previous pair, but as a fan, I had to try them out for myself.

Reimagined by Lipa, the shoes flaunt a triple black leather upper, stacked midsole, and zigzag stitching on their Formstrips. Striped laces add a touch of contrast to the sneakers, while Dua’s Flutur logo — which combines her name with Puma’s Formstrip motif — appears on the tongue and insole in a holographic finish. Overall, the shoes are fairly grungy, with a look comparable to that of Dr. Martens.

In their campaign, Lipa offsets the all-black style with brightly colored accessories, including ‘90s-esque jelly bracelets and bold resin earrings. The jewelry seems to align more with her funky personal style — but then again, the Mayze sneakers are meant to work for everyone, regardless of their fashion taste. So while Dua paired her shoes with matching black track pants, I decided to channel the singer’s more eclectic style with ‘00s green velour pants.

Even without a crazy color scheme, the shoes were able to make a statement thanks to their massive platform — which, like Lipa herself, seemed to toe the line between high fashion and streetwear. The style could easily transition between dressed up looks and more athletic ones, catering to a selection of outfits and demographics. I must confess, however, that walking around in the sneakers made me feel a bit like Frankenstien, albeit a more chic version.

Prior to this collaboration, I would have expected a similar shoe from Rick Owens, otherwise known as fashion’s Lord of Darkness. The designer has popularized goth streetwear throughout the years, and it’s hard to imagine someone else — let alone a neon-loving pop star — debuting a grungy, chunky sneaker suitable for the runway. Yet Lipa’s Flutur Mayze challenges Owens’ reign on the goth streetwear scene, and at a more affordable price, too.

A plush insole, adequate arch support, and treaded rubber outsole keep the shoe from prioritizing fashion over function. Although I’m probably not maintaining a schedule as tightly packed as Dua’s, I appreciated the Mayze sneakers’ comfort for running errands and taking walks around my block. In wet, after-snow conditions, the shoes gripped the ground securely and I never felt I was at risk of losing my balance — even teetering two inches above my normal height.

Regardless of your loyalty to Lipa, the sneakers are a great addition to any wardrobe. They’re comfortable, fashionable, and have the ability to mold to anyone’s style. Isn’t that what makes a great, everlasting shoe?

Since launching on December 18, pairs of the Flutur Mayze sneakers have remained relatively available on Puma’s website, with a retail price of $110. Considering the minimal design could serve as an alternative to other go-to sneakers — like Dua’s own AF1s — the competitive cost is pretty reasonable, and you’re guaranteed to get more unique fits out of the Mayze.

How it feels to wear the Mayze sneakers.

You could always style the sneakers with the rest of the Flutur capsule, which includes two baby tees, one black and one white, and a black hoodie. Each piece bears Lipa’s Flutur motif alongside Puma’s signature logo, which mimics the former’s holographic finish.

There’s more to come from Dua and Puma in 2022, according to the brand. With the Flutur capsule described as moving “from darkness to Technicolor,” future designs are anticipated to be a little more colorful than Lipa’s all-black Mayze sneaker — but it’s worth wearing part of the capsule’s origin story. After all, where would butterflies be without their chrysalis?