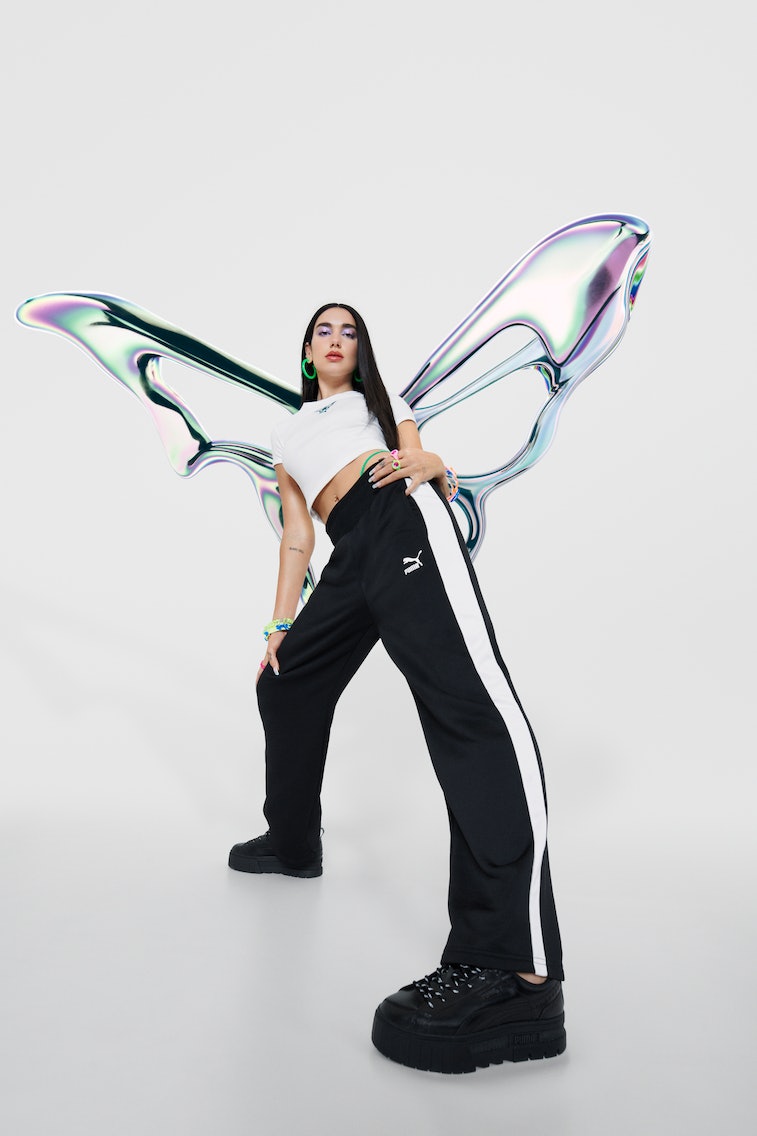 Dua Lipa and Puma are taking their partnership one platform-footed step forward with their first collaboration. After becoming a Puma brand ambassador last year, Dua is launching a co-branded capsule dubbed “Flutur,” named after the Albanian word for butterfly. The ‘90s-inspired collection includes hoodies, crop tops, and Lipa’s own “Flutur” version of Puma’s Mayze sneaker — reportedly, just a preview of more to come in 2022, Puma said in a press release.

“For me, butterflies are more than just beautiful creatures; they represent so much, like transformation, hope and metamorphosis,” Lipa said in a statement. “Over the past year, the butterfly has become especially symbolic and meaningful to me. I chose [the name ‘Flutur’] to pay homage to my heritage while also celebrating this new beginning with Puma.” An updated logo encapsulates this “new beginning,” combining Dua’s name and the brand’s Formstrip to create an iridescent butterfly.

#Throwback — Teased on Lipa’s Instagram, the retro capsule includes two baby tees, one black and one white, and a black hoodie. Each piece bears Dua’s Flutur motif alongside Puma’s signature logo, which mimics the former’s holographic finish. In the capsule’s campaign, the musician styles the co-branded apparel with ‘90s-esque jelly bracelets and colorful resin earrings.

The standout item from the Flutur collection, however, is the Mayze sneaker — previously modeled by Lipa in its debut campaign. Now reimagined by the singer, the shoe flaunts a triple black leather upper, stacked midsole, and zigzag stitching on its Formstrip. Lipa’s butterfly logo accents both the tongue and the insole to match apparel, while two lace options offer a bit of variety.

Dua’s metamorphosis — “It was important for Dua to release staple pieces that would complement any wardrobe,” Maria Jose Valdes, general manager of Puma’s Sportstyle Business Unit, said in a statement. “She knew what she wanted and brought those ideas to the table. This capsule is just a tease to what’s to come next year, we’ve been working around the clock with Dua to bring to life all of her ideas.” A full Flutur capsule is expected in 2022, according to Puma.

For now, people can indulge in Dua Lipa’s initial Flutur pieces, which will be released globally starting December 18 on Puma’s website and in stores. The collection, ranging from $30 to $110, will be extremely limited — best to catch it before it flies off the shelves.