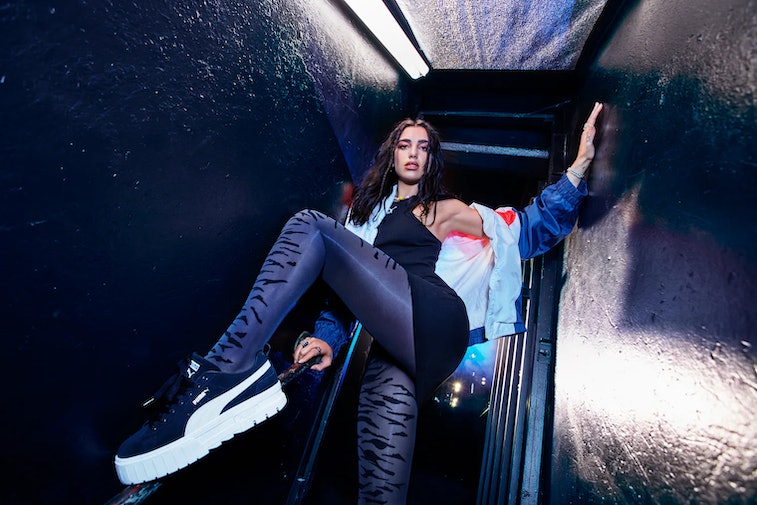 Dua Lipa has given us a first look at Puma’s new “Mayze” platform sneaker. Featuring a chunky midsole and signature striping, the shoe is a callback to Rihanna’s iconic Fenty Puma line, taking on a similar creeper style. But given the success of the Fenty kicks — plus Lipa’s reputation for eccentric style — the stacked platform sneakers will undoubtedly become a hit.

Lipa was announced as Puma’s new global ambassador back in November, though the debut of the Mayze sneaker is her first campaign with the brand. She joins Winnie Harlow, Cara Delevigne, and Skylar Diggins-Smith as representatives of Puma’s “She Moves Us” platform, which aims to celebrate women who are moving culture and sports forward.

Sneakers meant for strutting — The sportswear brand has applied this same mindset to its Mayze silhouette, saying the sneaker is “made for those who embrace the spotlight, on stage and off,” just like Lipa. With a chunky platform midsole, contrasting panels, and gold foil branding, the shoe is certainly hard to miss.

Three shades of the Mayze let wearers express themselves further. The first sees black paneling against a white leather upper, while the second swaps the two colors to create a black sneaker with beige panels. A final iteration, the most colorful, features pastel green, pink and light gray detailing.

All three versions of the shoe boast Puma branding embossed into the lateral quarter and heel. Gold foil detailing makes the logos unmistakable and reflective — great for if you’re actually in the spotlight at times. “The Mayze is the perfect fit, it works for me on stage and off,” Lipa shared in a press release. “The classic stacked sole is so versatile, I can work it into any look.”

Puma gets pampered — Adding to the luxury of the new sneaker, the campaign imagery was shot by fashion photographer Mario Sorrenti. Lipa can be seen wearing vintage Puma gear, like a windbreaker and classic Puma T7 track jacket, mixed in with more modern apparel and of course, the Mayze sneakers.

The new silhouette is slated to launch on Puma’s website, at the Puma flagship store in New York City, and select retailers on April 16. Retailing at $90, it’s a cheaper women’s exclusive than most, and though it’s being promoted by Lipa, the shoe might not see the same demand as other women’s sneakers like Nike’s Dunk. That means those looking to buy the platform kicks can actually score the silhouette — an occurrence almost as rare as owning the same sneakers as Dua Lipa.