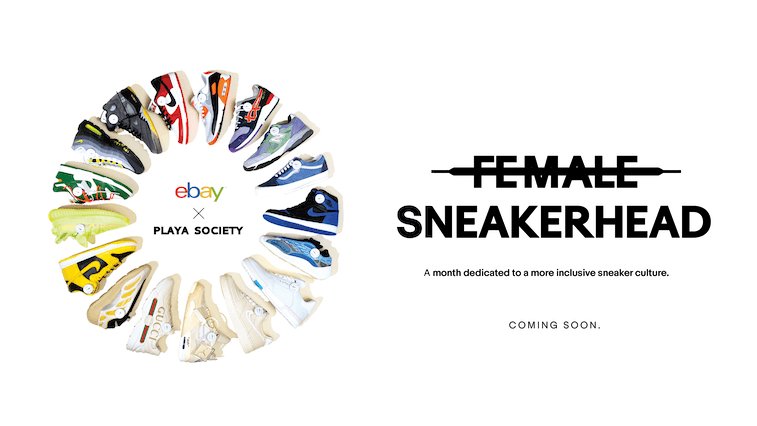 Fresh off releasing a sneaker-scented candle, eBay has revealed another surprise for sneakerheads — but this time, it’s just for the ladies. In advance of International Women's Day, the platform is kicking off its new Female Sneakerhead program: an entire month dedicated to celebrating the future of sneaker culture where women are better represented.

Over the past year, the women’s sneaker category grew more than 80 percent on eBay, while sales of men’s sneakers bought by female shoppers doubled, according to the site. But despite how these statistics have spiked, women have been in streetwear since its roots — and brands should act accordingly. As we wait for big name sneaker producers like Nike and Adidas to catch up — and make sure women can actually score its designs — we’ll be indulging in eBay’s inclusive capsule.

The future of footwear — To kick off the month-long initiative, eBay has collaborated with Esther Wallace, founder of Playa Society, to launch limited-edition Female Sneakerhead merchandise. Like her impactful messaging on Playa Society’s graphic tees, the new line has been developed to spark a cultural conversation about women and sneakers. Better yet, it’ll also drop alongside sought-after styles and rare grails eBay has found on its site.

Wallace’s capsule will include t-shirts, hoodies, and socks, designed in partnership with and available exclusively on eBay, starting March 8. It’s expected to look similar to work on Playa Society, which crosses out the “female” label on its apparel alongside a message: “Judge by achievements. Not by gender.”

Wallace will also join other well-known sneaker influencers in curating a Female Sneakerhead shop, which will see a rotating collection of the hottest inventory on eBay. Beginning March 8, consumers will be able to find trending sneakers — at a decent price — without digging through listings. That is, if another sneakerhead doesn’t score the kicks first.

“Being a sneakerhead is about hype, passion, style, and self-expression, not about gender. Yet inclusivity and visibility for women is sometimes missing from the culture," said Wallace. "If you identify as a sneakerhead, it means that you can express yourself through sneakers. And if you're a woman who is a sneakerhead, you just want your self-expression to be respected, well-represented, and unlimited in sneaker culture. That's what this line is all about.”

Thousands of sneakers incoming — On top of the Female Sneakerhead line, eBay will also work with the industry's top category trailblazers and influencers to share the stories of women in streetwear. Participants will share everything from their favorite brands and collections to their life experiences, creating content that will live across eBay’s channels.

Later in March, the platform — in partnership with Chicks with Kicks — will drop one of the largest and most unique collections of sneakers. The release includes over 2,200 pairs of collectible sneakers, sold exclusively on eBay. Let’s hope most pairs go to the ladies.