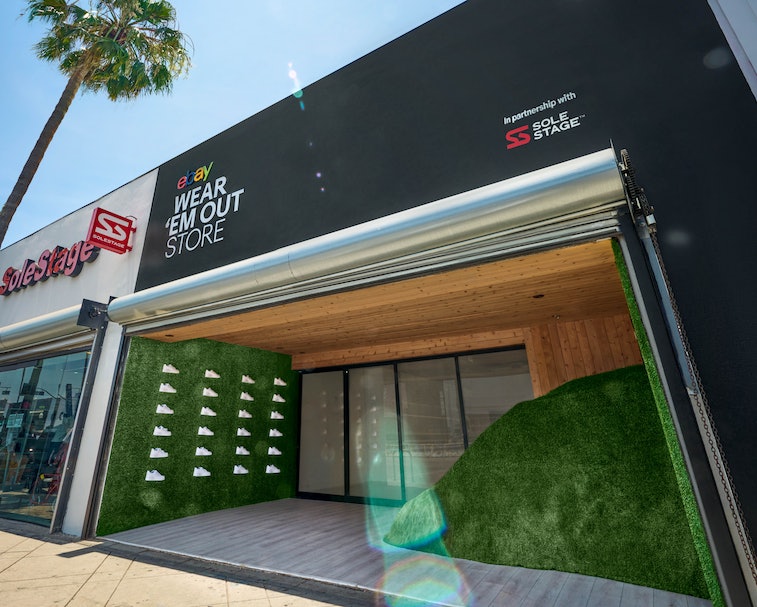 eBay is opening a tangible version of its renowned sneaker marketplace in Los Angeles. The store, which is called Wear 'Em Out, will feature exclusive kicks for up to 70 percent off today’s market price — but the discount only applies to sneakerheads that wear their new shoes out of the store.

“Most people can identify with that feeling of getting a new pair of shoes that you love so much, you just HAVE to wear them out of the store,” Garry Thaniel, GM of Sneakers at eBay, said in a press release. “The Wear 'Em Out store celebrates a love of sneakers, while acknowledging that sneakerheads are often balancing what they wear with what they keep in the box.”

A majority of sneakerheads wear less than half of their collections, according to a study eBay conducted among over 1,000 sneakerheads. Hopefully, the Wear ‘Em Out store can change that statistic.

Exclusive picks by Offset — Ahead of the store’s Memorial Day weekend opening, eBay tapped rapper Offset to help curate its offerings. Among them are an Air Jordan 1 Retro High OG Patent Bred and a Yeezy Boost 700 Wave Runner, the latter of which recently restocked but continues to resell for $100 over its retail price. The coveted styles, including others yet to be revealed, will be available at the Wear ‘Em Out store at a considerable discount.

“eBay is my go-to place to find the kicks you can't find anywhere else,” Offset said in a statement. “For sneaker collectors like me who lay awake at night trying to decide if you're going to wear your new kicks, eBay's Wear 'Em Out store makes light of something that haunts the entire sneaker community and gives people a new way to access the shoes they want for summer.” According to eBay, the shop is designed to help sneakerheads like Offset live in the moment.

Get your gains — The Wear ‘Em Out store opens on May 27 at 455 North Fairfax Avenue in Los Angeles. Sneakerheads are invited to browse the shop’s selections through Memorial Day weekend to get their preferred grails — and more importantly, put them to use on-feet.