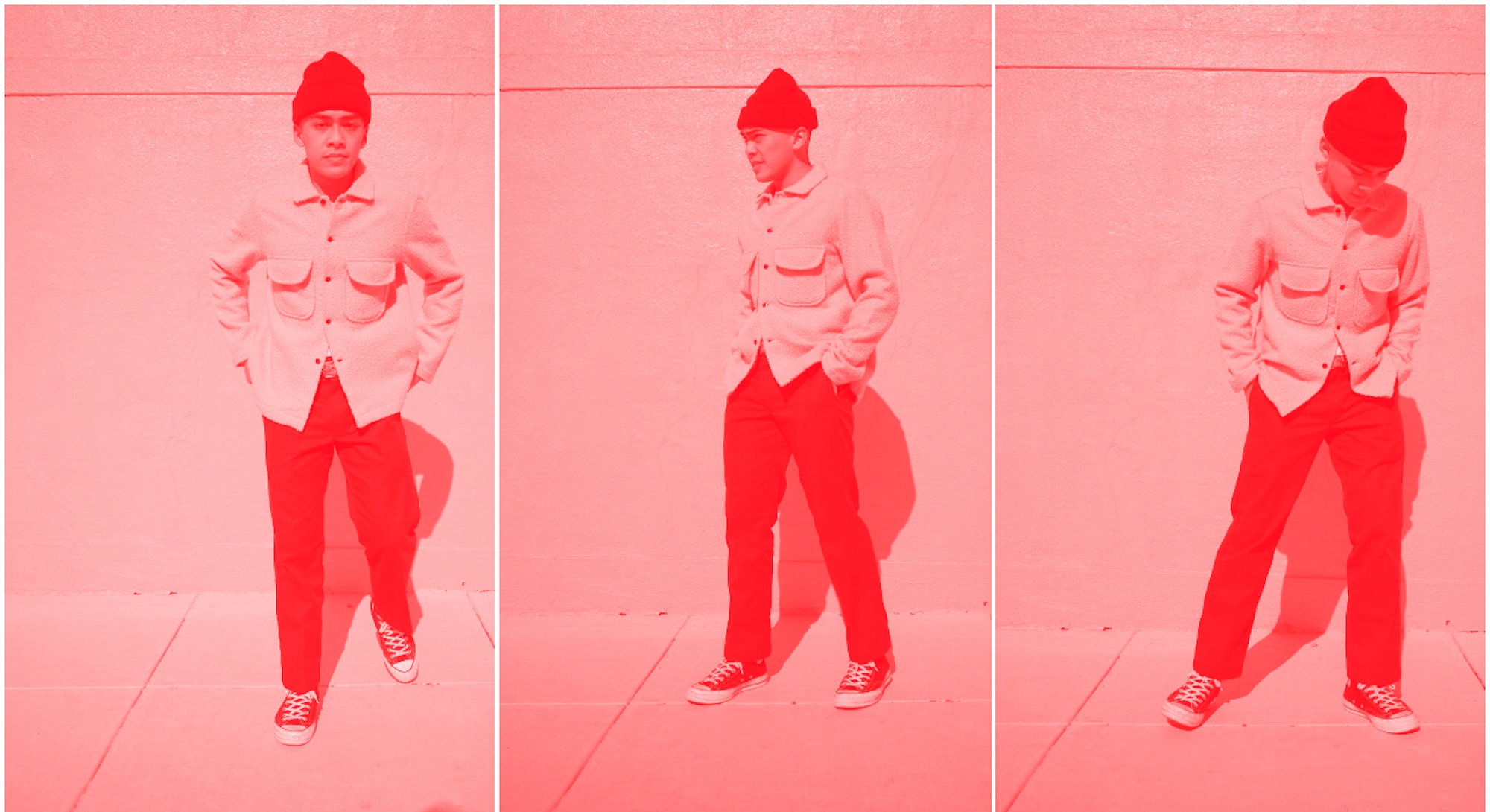 Growing up, Chuck Fowler hated his gap tooth. “It made me very insecure,” says the now 26-year-old structural engineer. To compensate for it, he turned to clothes.

“If I really couldn’t control it,” he says of his smile, “I could dress how I wanted to.”

As a kid in Connecticut, the mecca of prep, Fowler developed an early obsession with Ralph Lauren, scouring the racks at T.J. Maxx for any pieces he could find. Clothing served as protection, a way to say, Hey, I may have a gap in my teeth, but I’m still cool.

Today, Fowler lives in Boston and is the moderator of r/malefashionadvice, “Reddit's largest men’s fashion community,” with 3.1 million users. After amassing an archive of his fit pics on Imgur, an image-hosting site, Fowler in early 2020 started posting fit pics on his public Instagram account @soartisticnow, where he’s since built up a modest following of just over 1,440 followers. Though a far cry from the numbers that bona fide influencers command, Fowler’s followers still sort of treat him like one.

“I used to not tag brands,” he says, referring to a hallmark practice of real influencers or aspiring clout chasers. “I thought that was tacky for a little bit, but then people would comment too much and be like, ‘Where'd you get those pants?’” As Jian DeLeon — Nordstrom Men’s fashion and editorial director and certified fit god — puts it, “There was a reason why Instagram changed the ‘like’ button to a shopping cart.”

Guys like Fowler may not necessarily aspire to be influencers, but their fit pic accounts have usurped magazines and blogs as the primary source of style inspiration for a generation of very online, fashion-obsessed men.

“What these [online] communities do is they democratize this knowledge that was previously held by people that worked in the industry or who were really savvy consumers,” says Nathaniel Weiner, a senior lecturer in cultural studies at Central Saint Martins in London. On Instagram, as DeLeon puts it, paraphrasing stylist Marcus Paul, “Not everybody is an influencer, but everybody is influential.”

Social media has also cracked open access to an opaque industry, connecting fashion insiders with their followers. “You can hit up anybody so easily on Instagram, and you don’t need to go through the crazy, often undemocratic gatekeeping culture that comes with forums,” says Lawrence Schlossman, co-host of the Throwing Fits fashion podcast. “Even some of those early blogs felt like a club that, you know, you're trying your damnedest to get into. Everything seems much more open now.”

Fit pics are also a refreshingly intimate, relatable alternative to the hyper-stylized, ultra-curated influencer images that flood people’s feeds. “Fit pics feel a little bit anti-establishment or rebellious,” says Fowler. “Like, Oh, this isn’t [an influencer on] the Instagram Explore page crossing the street, buttoning their shirt. It’s just someone in the house. It just seems a little bit more lived-in, which is cool.”

Fit pics, in other words, feel like a friend offering a style tip, not a fashion insider telling you how to dress.

The term fit pic emerged in the early aughts on nascent menswear forums like StyleForum and SuperFuture, where a global community of like-minded enthusiasts would congregate to indulge their niche fashion interests, from selvedge denim and Japanese workwear to Italian tailoring and streetwear.

“It was kind of this sub rosa world where the clothing was sort of like participating in art more to the extent that it is now,” says DeLeon. Weiner agrees, pointing out that the largely text-based forums were “relatively free of that commercial imperative” that drives influencer culture. In other words, you weren’t being incessantly marketed to.

On the forums, unlike on Instagram, men’s fit pics were from the neck down. Revealing the guy behind the clothes was a gesture of feminine vanity. A shot with a man’s face in it “was oddly taboo — looking back, embarrassingly so,” says fashion writer Jon Moy, formerly of the Four Pins menswear blog. “There were definitely a lot of attempts to sort of separate menswear blogging from womenswear blogging. Like, ‘We don't take selfies; it’s about the clothes,’ which was obviously a defense mechanism.” (Fowler’s fit pics are sometimes from the neck down, but he says that’s only because his head doesn’t fit.)

There’s an added serviceable element to fit pics — to seeing a real person put together an outfit — that the forums fall short of providing. “With fit pics, there’s a head-to-toe component,” says Schlossman. “[On the forums] a guy can talk about a fly pair of loafers or a great pair of pants, but then to see how it all comes together and to look at it and observe it from the ease and comfort of your phone, I think that adds a lot of value.”

For Justin Andrada — a 24-year-old Bay Area resident who works in finance and runs the account @whatyoudressingfor with his girlfriend, Melissa Yan — posting fit pics is a way to document the progression of his personal style and to create an online conversation.

“Most of our interactions, like when it comes to talking about clothes, happen in real life, whether it's friends or family, at work, or just wherever,” says Andrada. “So this just kind of gave us a way to continue having that interaction, to still get to talk about our point of view on fashion and the type of clothes we like to wear.”

The ability to interact with, discover, and share fit pics — both your own and others — is a major part of the photos’ appeal. It’s a way to constantly stay in the know and inspired, while encouraging experimentation. “There's a lot of cool people, and it has a wider reach,” Fowler says of Instagram’s menswear community. “It’s broadened my horizons of what I think is cool. Thinking things are cool is mostly [due to] exposure. You see it enough times, and you’re like, ‘Oh, that is actually dope. That is sick.”

Fowler remembers growing up and feeling restricted by certain style rules: no pleated pants, no mixing patterns. But seeing guys online reject traditional dress codes empowered him to experiment, too. “I used to be like, ‘You can’t do that. Patterns are for the bottom and then you subdue them with a solid color top,’” Fowler recalls. “But now, I wear so many patterns.” Another broken rule? No camo. Now, Fowler says, he wears camo every week.

If the forums were about appreciation, Instagram is about flexing — showing off your fits to earn the social approval of your style tribe. This form of sartorial one-upmanship is rooted in streetwear culture, where the humble T-shirt or hoodie is elevated to a status symbol of insider cool.

In the ’90s, a Supreme box logo tee signaled your allegiance to a downtown skater culture; you had to be there. Today, anyone with a credit card and internet access can buy it secondhand — and flaunt it in a fit pic for clout.

Despite streetwear being largely reduced to an (incredibly popular) aesthetic, it has shaped the way guys communicate through clothes, no matter what they’re wearing. “The biggest flex for me is how I partner garments and make it work as one full uniform,” says Argie Alcantara, a 26-year-old software engineer and ex-fashion blogger in Manila. Alcantara started posting his fit pics on Instagram in 2013 because he found he could connect with a much broader audience of menswear heads than through his blog.

Like Fowler, Alcantara isn’t a traditional influencer, but the positive reinforcement he’s received online has encouraged him to up his fit pic game and use his account as a way to provide daily style inspiration and highlight local brands. “For me, posting fit pics is already a lifestyle,” says Alcantara. “It’s such a great feeling that no matter how [few followers you have], you could reach these people. And they tell you, ‘Oh, wow, you dress so well, I idolize you so much.’ It’s empowering.”

DeLeon notes that as our mobile camera technology has improved, so too has our desire to share our fit pics. But the flood of such photos has bred an aesthetic sameness, forcing guys to constantly churn out new fits and top themselves and each other. “It’s almost like how I go to a lot of different stores around the world and see the same brands that live in New York,” he says.

“So when you see something local,” he continues, “it’s something more special that you don’t necessarily see on the internet. It has a certain purity to it, it grabs my attention more, because it's just like, Okay, cool, this [person] hasn’t been influenced — whether consciously or subconsciously — by something they might have seen on Instagram. This person clearly just has a truly effortless approach to what they put on.”

The broad appeal of fit pics lies in their apparent authenticity and unpolished vibe, and the lo-fi format rejects the heavily edited influencer images that function like ads. Brands now understand that you don’t need to be a typical influencer to make an impact. Last October, Telfar reposted a picture of model and actor Tyson Marzouq, a Black trans man, wearing the label’s logo belt.

The repost amassed Marzouq new followers, and Telfar offered him a discount to purchase another item as a gesture of goodwill. “I thought that was amazing,” says Marzouq, who recently posted a fit pic of him wearing a Telfar T-shirt. As fashion has become more inclusive, social media has also made space for folks like Marzouq who have historically been underrepresented in editorials and campaigns, and on runways.

For brands, reposting user-generated fit pics is free marketing and creates a deeper connection with consumers. For fit pic posters, it’s a way to engage with a brand you love on a deeper level, but it also forces you to play nano-influencer. People now often tag brands in the hopes of getting reposted for followers and clout. But there’s a fine line between connecting with a brand and clout chasing.

“I’m not gonna listen to some dude in fucking Gap.”

“You find some people who are trying to be influencers and they're, like, tagging Express,” says Fowler. “The menswear equivalent is like Spier & Mackay guys who are like, ‘Check my reference code [for a discount].’” To earn respect in the form of followers and clout, you need to demonstrate an elevated taste level, sense of personal style, and fashion knowledge beyond the mall brands. “I'm not gonna listen to some dude in fucking Gap,” says Fowler.

As trend cycles shorten to the point of threatening their very existence and the resale market makes fashion widely accessible, personal style takes place over following the fashion calendar. Dress codes are also relaxing, and guys are building a more fluid wardrobe that expands beyond the suit or seasonal looks.

Fit pics are becoming an even more potent cultural currency in a community built on genuine appreciation and enthusiasm for fashion and style. This may be the biggest flex of all.