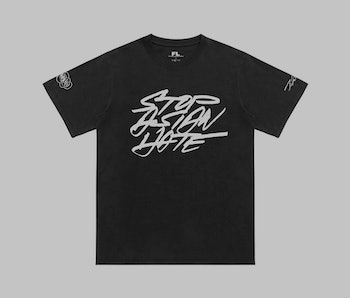 Streetwear is indebted to the Asian community, which has been pivotal for its growth on both the consumer and creative end. Unfortunately, we haven’t seen the same outpouring of support in response to the uptick in violence against Asian peoples as we did last summer for Black Lives Matter.

The most noteworthy development in the space has been Chinatown Market’s delayed response to the Atlanta massage parlor shootings, made especially gross by the white founder’s co-opting of Chinese-led bootleg culture. It took three days for the brand to issue a statement, and by the time it announced a fundraiser T-shirt followers felt that it meant less than the days of silence.

A less fraught T-shirt seeking to “Stop Asian Hate” is now available courtesy of Futura Laboratories and Haze. The legendary graffiti artist’s brand is both a tee and hoodie featuring original Futura designs, with all proceeds going to organizations that support Asian Americans and Pacific Islanders (AAPI).

Futura’s signature text — “Stop Asian Hate” appears on the front and back of both the T-shirt and hoodie, with the placement flipped on each for Futura’s script and another hand-written text. All profits raised will go to the “AAPI Community Fund” organized on GoFundMe, which will then issue grants to trusted organizations.

A large portion of Futura’s fanbase is in Asia, and the flagship store for his Futura Laboratories clothing brand is in Fukuoka, Japan. In other words, he owes a large part of his success to Asians — as do many other contemporary streetwear brands. Japan, specifically, was crucial to the early growth of Supreme and Stüssy, and it’s fair to expect that they do something to support the Asian community during this time of crisis. The same could be said of Noah, which opened two outposts in Japan before it expanded to a second within the United States.

Show your support — Futura Laboratory’s joint fundraiser with Haze is available now through the NTWRK website. The T-shirt is priced at $40, while the hoodie is $90 — making for an easy act of support that nets you something to wear, too.

Even if you don’t plan on purchasing anything, you should consider donating directly to the AAPI Community Fund on GoFundMe.