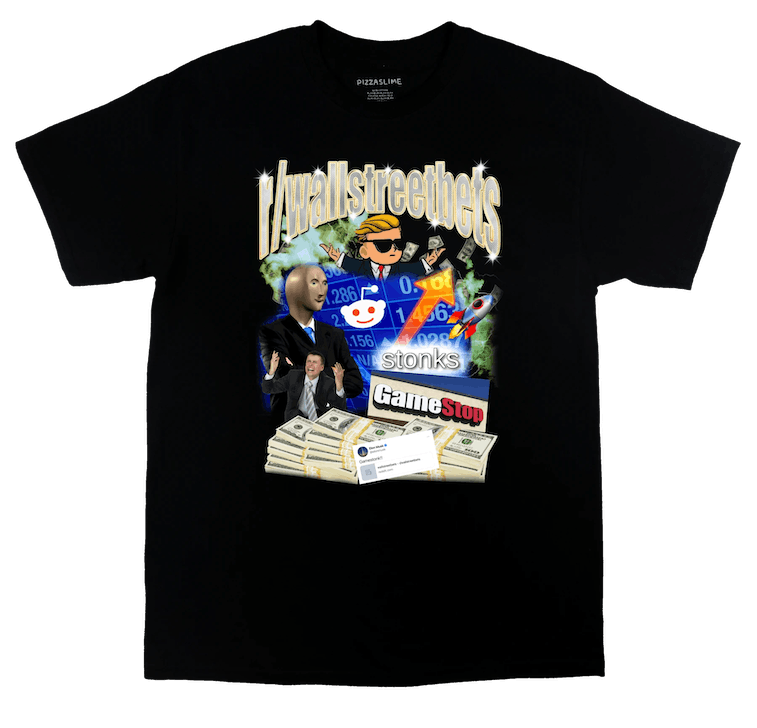 Whether you’re on the business side or the stonks side of Twitter, you’ve heard about the surge in GameStop stock, as well as the rise of other near-bankrupt companies’ stocks. After Reddit users rallied behind the companies, a battle broke out between hedge funds and individual investors. Instagram user @pizzaslime is now commemorating the historic event through meme format — obviously — and released a shirt to permanently memorialize our capitalist suffering. Featuring Elon Musk‘s now-infamous “Gamestonk!!” tweet, the tee is as chaotic as the ongoing situation.

While it is entertaining to watch the rich panic for once, the whole event is pretty dystopian. After GameStop saw its stock soar in price by more than 1,700 percent at its peak, popular stock trading app Robinhood locked down trades of GameStop, AMC, BlackBerry, Nokia, and others. The move deliberately protects hedge funds, kills those companies, and ruins the illusion the free market is free. Plus, the subreddit responsible for the stock spike, called r/WallStreetBets, got banned from Discord for reports of racial slurs and hateful speech, according to multiple outlets.

Now, Discord has revived the subreddit with new moderation policies, and in another historical moment, Alexandria Ocasio-Cortez, Ted Cruz, and Elon Musk all sided with the Reddit users in their takedown of hedge funds. Such a WTF moment in time deserves to be commemorated.

The meme makeover — Aesthetics aren’t part of this shirt — what matters is what it stands for. The wild shirt celebrates the subreddit r/WallStreetBets and its efforts in surging GameStop's stock, featuring its name at the top of the tee. Below, Reddit’s icon, GameStop’s logo, rocketship emojis, piles of cash, and the popular “stonks” meme add to the chaotic design.

Stonk in style — Meme-lovers can cop the crazy shirt for $33 on creator PizzaSlime’s website, or opt for a separate, more concise design. Less than 24 hours ago, PizzaSlime created a “Fuck Robinhood, all my homies hate Robinhood” shirt for those who just want to get to the point. It retails for the same price as its chaotic counterpart and can also be purchased on PizzaSlime’s website.

It's still being debated what might happen with GameStop's stock over the next few days, but with more news developing hourly, we’re eagerly waiting for the war on Wall Street. And more memes.