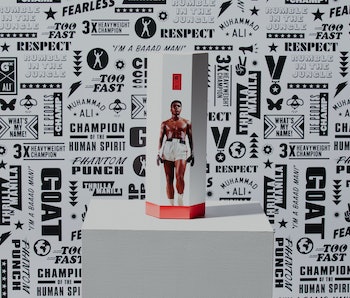 Gatorade and Champion have created a limited-edition apparel capsule so exclusive that pieces will only be available for order within a 48-hour window. The collection, which consists of water bottles, posters, athletic clothing, and loungewear, honors Muhammad Ali’s impact on sports — although the boxer’s legacy will go on much longer than this thematic capsule.

As a leader both in and out of the ring, Ali remains an icon. Not only has he been ranked the greatest heavyweight boxer of all time, but he used his platform to speak up for the Muslim and Black communities, and against the Vietnam War. And as a Grammy-nominated poet, Ali put forth some of today’s most eloquent quotes — one of which is emblazoned on Gatorade and Champion’s limited merch.

Honoring Ali’s dedication to greatness — At only 22 years old, Ali shocked the world when he defeated reigning champion Sonny Liston to take the world heavyweight title, becoming the youngest boxer to do so at the time. Triumphantly, he declared: “Eat your words! I am the greatest! I shook up the world. I'm the prettiest thing that ever lived.”

The match — and subsequent quote — made history. Now, Gatorade and Champion are encouraging others to keep up with Ali’s winning attitude with their clothing collection, three pieces of which read, “I shook up the world.” Highlighted in Gatorade’s signature orange color, the quote stands among tie-dye designs and graphics of the late boxer.

More casual pieces, like a gray hoodie and pair of sweatpants, honor Ali and his resilience through another quote. “If my mind can conceive it, and my heart can believe it, then I can achieve it,” read the pieces, with the saying accompanied by Champion and Gatorade branding.

An anorak jacket comes dressed in a white base decorated with orange lighting bolts, nodding again to the sports drink company. Its chest bears Ali’s name, while the hood boasts a copy of his signature. The boxer’s name also appears in huge text on the back of many pieces, one of which shows a photo of Ali holding up his fists triumphantly.

Available for 48 hours only — Along with the clothing capsule, Gatorade has designed a customizable 30oz Gx bottle, which bears Ali’s name as well as a few quotes and inspirational words. And since the boxer can be considered the OG Greatest of All Time, “GOAT” has been written on the back of the water bottle. Consumers can then label themselves the GOAT by customizing the lid to bear their name.

Set to launch on June 4 — the day after the 5th anniversary of Ali’s passing — Gatorade and Champion’s honorary clothing collection will only be available until June 6 at 1 p.m. ET. To prepare for the 48-hour sale, consumers can preview the capsule on Gatorade’s website, where the seven pieces will eventually be up for grabs.

Gatorade will continue to honor Ali throughout the summer, however, through its GOAT-inspired Gx bottle, alongside a set of six Champions Edition collectors’ bottles — limited-edition GTQ bottles each featuring a different iconic Ali fight poster.