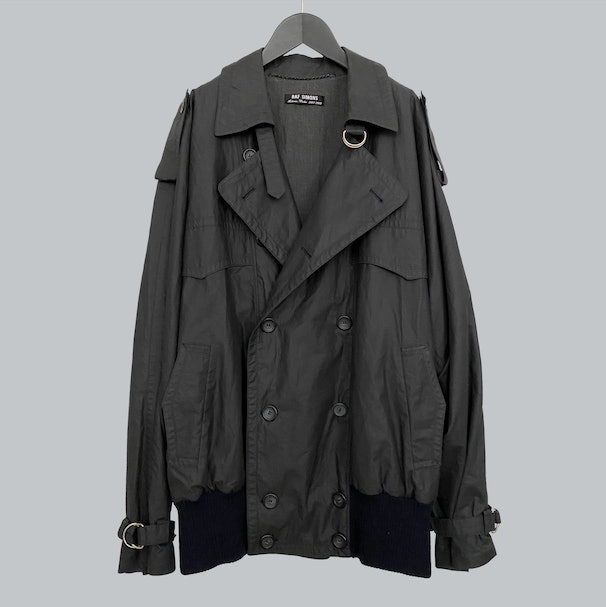 Raf Simons is one of the most influential designers alive, with an archive of work dating back to 1995, when he started his namesake label. Along with Rick Owens, Rei Kawakubo of Comme des Garçons, and Helmut Lang, his pieces are some of the most collectible in contemporary fashion. Acquiring some of his most acclaimed pieces requires a significant amount of digging and / or money, but a new webstore will spare you for the former if you're willing to part with the latter.

C'est Chaud, which translates to "it's hot" in French, is a new site launched by Lee Young Kyoon to hawk a nontrivial amount of archival Raf. Kyoon's assemblage dates back to the monumental 2001 "Riot! Riot! Riot!" collection and continues up to as recently as the 2018-2019 "Replicants" collection. But a word of warning: If money is an object, this is not the shop for you.

Prices aren't even listed, and it'll take a formal inquiry to find out how much the goods will cost. But to give you an idea, a distressed vest from FW16 sold for $1,900 — and that's far from one of the rarest items.

Grails on grails — Amongst the offerings is the hybrid trench coat / bomber from the runway show for the aforementioned "Riot! Riot! Riot!" collection. Nearly 20 years old, it's just as a wearable today and would become an instant wardrobe highlight for anyone with the sizable funds needed to purchase it. It may not be the camo bomber — which is probably the most iconic Raf piece of all and once sold for $47,000 — but it's a radical piece that somehow feels even better suited to today's landscape. Also available from the same collection is the patched crewneck sweater.

Other pieces include the "Poltergeist" and "Dazzle Ships" parkas, three "Exiles" T-shirts from FW04, and the paisley hoodie that predates the luxury space's wide embrace of streetwear staples. More recent items include a pair of Joy Division lanterns from a few years back that can fetch thousands of dollars and feature the iconic cover art designed by Peter Saville for the album Unknown Pleasures.

Even if purchasing any of the archival pieces is nothing but a fantasy, it's still worth perusing C'est Chaud as an exercise in history. It's not often that you see this many memorable and culture-shaping pieces in one place. It's even rarer they're actually for sale.