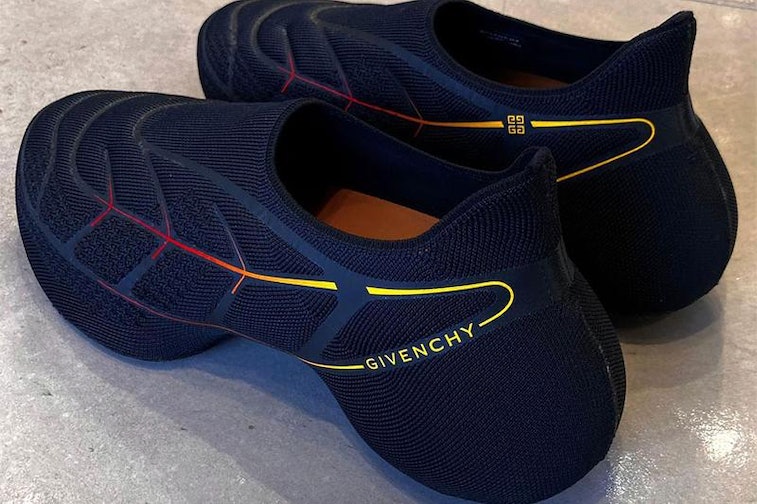 Ye’s own offering — not unlike Williams’ — consists of a single knit panel with a slight indent at midfoot. Sans laces, the slip-ons are supposed to look smooth and aerodynamic, although Givenchy’s version is arguably sleeker: With rounded edges and slightly indented paneling, the luxury sneaker flaunts a more curvaceous shape than the bulky Knit Runner. Still, that hasn’t stopped people from comparing the two knit sneakers, especially as Yeezy’s version is considered the first and most recognizable model.

Let’s compare — Yet what seems to differentiate the two sneakers the most — at least, according to Williams — are their sole units. The Knit Runner sports a thin outsole with a wavy tread, making the shoes not unlike a moccasin. In contrast, Givenchy's TK360 features waxed knit bottoms with protruding triangular grips, helping the outsole blend seamlessly into the sneaker. The clear, cleat-like sole unit is what Williams pointed to on Instagram in response to comparisons to the Knit Runner: “With a sole tho...big difference,” he wrote. “Show me another knit shoe without a sole.”

Skeletal graphics, which wrap around the TK360, elevate the luxury model even further. Subtle knit patterns at the edge of the toe area add additional texture — something Yeezy’s version lacks — as branding towards the backside makes clear which brand the shoe belongs to. In terms of design, the Knit Runner seems to pale in comparison, bearing only a two-tone color scheme and a small graphic of each sneaker’s respective size.

So far, Givenchy’s sneakers have appeared in tonal white and purple palettes, already offering greater color schemes than Yeezy. A black TK360 has also been teased by Williams, accented by orange gradient graphics.

Ye just got out-Yeezyed — Williams may have been inspired by Ye’s knit sneaker, but the creative director seems to have reworked the silhouette for the better. Overall, the Givenchy TK360 is more aesthetically pleasing than the Knit Runner, and its waxed sole seems more durable as well. Of course, the luxury footwear will cost more than Yeezy’s version when it eventually debuts — but dare we say the extra cost might be worth it?