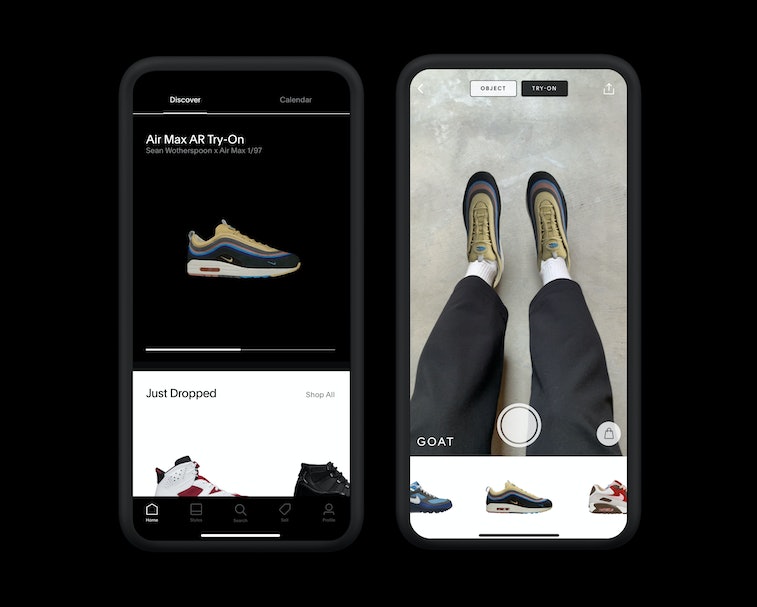 Air Max Day is coming up, and it’s not just Nike that’s celebrating the occasion. Throughout the month of March, resale site GOAT will be releasing rare Air Max models that you actually can try on — via your camera. With the site’s augmented reality try-on feature, you can wear coveted pairs virtually, including designs by Off-White and Sean Wotherspoon.

Virtual sneakers have picked up popularity recently as augmented reality becomes, well, more of a reality for creators and consumers. With IRL sneaker demand so high, it’s become tough to score any pair of shoes, opening up another market for sneakerheads. “Crypto artists” have been hired by virtual shoe brands — yes, those are a thing now — like RTFKT Studios to create non-tangible sneakers exclusively for online wear. But even electronic sneakers can sell for prices that rival rare real-life pairs, and GOAT is blessing the sneaker world with an opportunity to try the technology out for free.

Seriously scarce — Augmented reality is old news to the reselling platform, but that doesn’t make this event any less exciting. Instead, GOAT is adding some much-needed fun to this month, while also celebrating one of Nike’s most coveted silhouettes. Plus, it’s not every day you get to virtually try on a pair of sneakers worth thousands of dollars — here’s your chance to feel like Virgil Abloh or Travis Scott.

For every Friday in March, GOAT will drop two new silhouettes to test in augmented reality. The first pair to launch is Sean Wotherspoon’s corduroy Air Max 1/97, which boasts colorful layering, frayed edges, and velour detailing. Dropping alongside it is the retro Nike Air Classic BW Stash, originally released in 2003. Across reselling sites, both pairs are listed for upwards of $1,000, but GOAT users can now try on the models for free — before deciding they’re dropping some serious cash.

Last but not least, the platform has lined up two nostalgic models, one of which is re-releasing this year. A 2005 pair, the Air Max 180 ‘Opium,’ will become available for augmented reality fittings alongside the 2021 Dave’s Quality Meat x Nike Air Max 90 ‘Bacon,’ originally launched in 2004. Both Air Maxes drop on the platform March 26, when Nike is observing Air Max Day with the ‘Bacon’ pair’s release.

Options no matter your budget — With its AR features, GOAT is truly giving sneakerheads everything they could desire — ultra-rare, highly coveted, and retro styles — all of which we can enjoy without SNKRS’ “Got 'em.” And while the technology will help some of us in deciding which pair to splurge on, it’ll also give others the chance to try on an exclusive pair, making the sneaker world a little bit more inclusive.