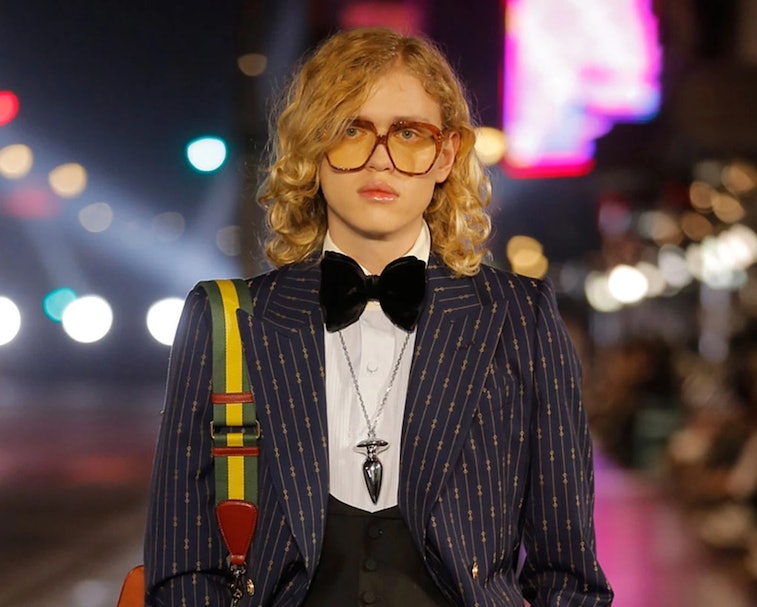 Modeled by Gucci’s first runway plus-sized models, feathered robes and silk slips balanced between the line of old Hollywood glamour and bedroom styles; latex tops, over-the-elbow leather gloves, and thigh-high tights leaned towards the latter. It was the smallest part of Gucci’s presentation, however, that left the biggest impression. According to the designer brand, sex toys make for hot jewelry.

Creative director Alessandro Michele has always been a provocateur; Gucci’s recent Aria collection included leather harnesses — a play on the label’s equestrian origins — as well as leather whips and copies of Sigmund Freud’s Three Contributions to the Theory of Sex. Yet luxury butt plugs may be too much for Gucci’s affluent demographic, and the pieces are unlikely to make an appearance in shop windows. Perhaps like real, useful sex toys, the jewelry will be made to order — to ensure the perfect fit.

Is sex toy jewelry on the rise? — After the pandemic (whenever that is), many speculate the return of the roaring ‘20s; months of quarantine and social life restrictions giving way to frivolity and decadence. There will be “loosening of sexual mores,” writes the Associated Press, while The Guardian predicts a “sexplosion.” Gucci is simply keeping up with the demands of the people, even if those demands are typically reserved for private spaces.

While the thought of sex toy jewelry going mainstream seems far-fetched, we’re entering a new era of promiscuse freedom — jewelry brands like Crave and Bijoux Indiscrets already sell vibrators disguised as necklaces; butt plug necklaces may be tame in a few years. Just make sure to style accordingly, and establish a safe word.