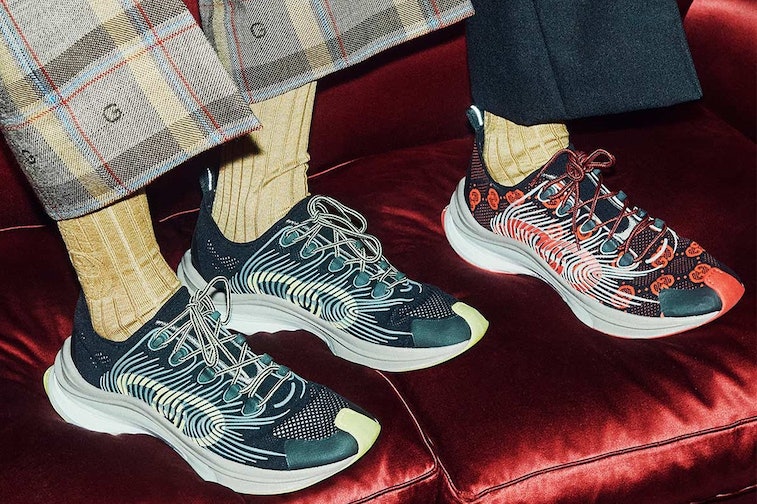 Gucci is launching a silhouette that may just be its most appealing foray into sneakers yet.

The Gucci Run’s dynamic appearance contrasts considerably from its humble name, as bright colors, spiraling lines, and the luxury house’s ever-covetable double-G logo combine on a performance knit upper. It looks a lot more like something you could actually exercise in than, say, the Balenciaga Track sneaker. But make no mistake, the Gucci Run is for the sort of flexing that doesn’t involve breaking a sweat.

Five different color schemes are ringing in the launch for Gucci’s new sporty sneaker, which retails for about $870. The Gucci Run isn’t yet available on the brand’s U.S. website, but its release in the U.K. signals that it should be on the way to the States and some highly fashionable feet quite soon.

A new status symbol trainer — Atop a technical knit upper, which is comparable to most contemporary running shoes, is a series of swirling rubber lines somewhat reminiscent of Salehe Bembury’s recent obsession with fingerprints. Gucci’s interlocking logo is then shaded into this pattern, and you can find the mark again within the knit of two of the more bold color variants.

Gucci hasn’t gone too far into the details for the Run’s performance aspects, probably because such concerns are secondary to how it looks and what it says (namely, I have money). Two distinct parts make up the wavy midsole, although we have no idea if it packs EVA foam or some other ultra-comfy material. What we can confirm is that each pair is made in Italy, which should mean a significant increase in quality compared to the Nike or Adidas kicks you may typically run in.

White, grey, blue, black, and red/black versions make up the initial lineup for the Gucci Run, and it’s a safe bet that more variants will be on the way in the months, if not years, to come. We’re still waiting on the aqua green scheme that’s been teased and is the most fetching of them all — and it’s probably only a matter of time until Gucci turns the sneaker into an NFT, too.